The Wall Artform That “Works over Time”: The Generali Group and Fine-Art Posters

Generali’s first foray into marketing communications coincided with the birth of newspapers between the mid-19th and early-20th centuries. From the late 19th century, the Generali Group began to make extensive use of this medium, adding it to the many other publishing and advertising mediums in popular use at the time, including posters, calendars and almanacs detailing the insurance products, business activity and most of all the founding values of the Group: solidity, reliability and dynamism in the service of lifelong peace of mind. These principles are expressed in the iconography of the winged lion and the backdrop of Venice, the symbols of centuries of enterprise and robust economic foundations, and the rustic landscapes that offer a bucolic vision of reassuring trust and peacefulness.

The documentation regarding the beginnings of Generali’s colourful figurative posters can be traced back to the first decade of the last century. The company’s first illustrated poster was designed by Gian Luciano Sormani and depicted the figure of Mercury set against the backdrop of the Venice lagoon.

Further posters were designed in the following decade by Ferruccio Chiurlotto and Plinio Codognato among others.

Alongside the advertising posters, the company also distributed other products for advertising purposes such as calendars and cards, a widespread practice introduced at the turn of the 19th century and often involving illustrations by renowned artists.

Such is the case, for example, with the Generali subsidiary Anonima Grandine: almost all of their illustrations between the Great War and the early 1930s were entrusted to the renowned painter Achille Beltrame, famous for his many illustrations for the Domenica del Corriere weekly newspaper.

Starting in the mid-1920s, following the challenges of the war and immediate post-war period, the company was able to significantly reinforce its financial and corporate foundations, laying the groundwork for the growth of the following decades. In part because of the shifting historical and economic context, new and more sharply defined criteria were introduced for corporate publicity and visibility, which revolved around collaborations with prestigious illustrators and graphic marketing experts.

And so, in the latter half of the 1920s, Generali began working with Marcello Dudovich, among the leading international graphic designers of advertising posters.

Over the course of a decade, Dudovich would produce a respectable quantity of posters for the company, often featuring Venice and its lagoon.

In the 1930s, other advertising graphic designers of note collaborated with Generali and its subsidiaries, such as Anonima Grandine and Anonima Infortuni, including Gino Boccasile (who became popular for the “signorina Grandi Firme” he designed for the cover of Pitigrilli’s “Le Grandi Firme” literary review), who designed sketches for posters, fliers and calendars for Anonima Grandine; other artists who worked for Anonima Grandine or its parent company during those years include Osvaldo Ballerio, Aldo Raimondi and Franco Mosca. In that same decade, Generali launched a collaboration with Modiano, the renowned Triestine lithographic printing firm. Pollione Sigon, at the time and for many years later the leading illustrator within Modiano, was tasked with creating posters, calendars and other promotional materials for Generali.

In addition to the materials issued from the parent company, there were also those of subsidiaries that went on to become part of the Generali Group over the years, attained through careful conservation and acquisition from antique dealers. 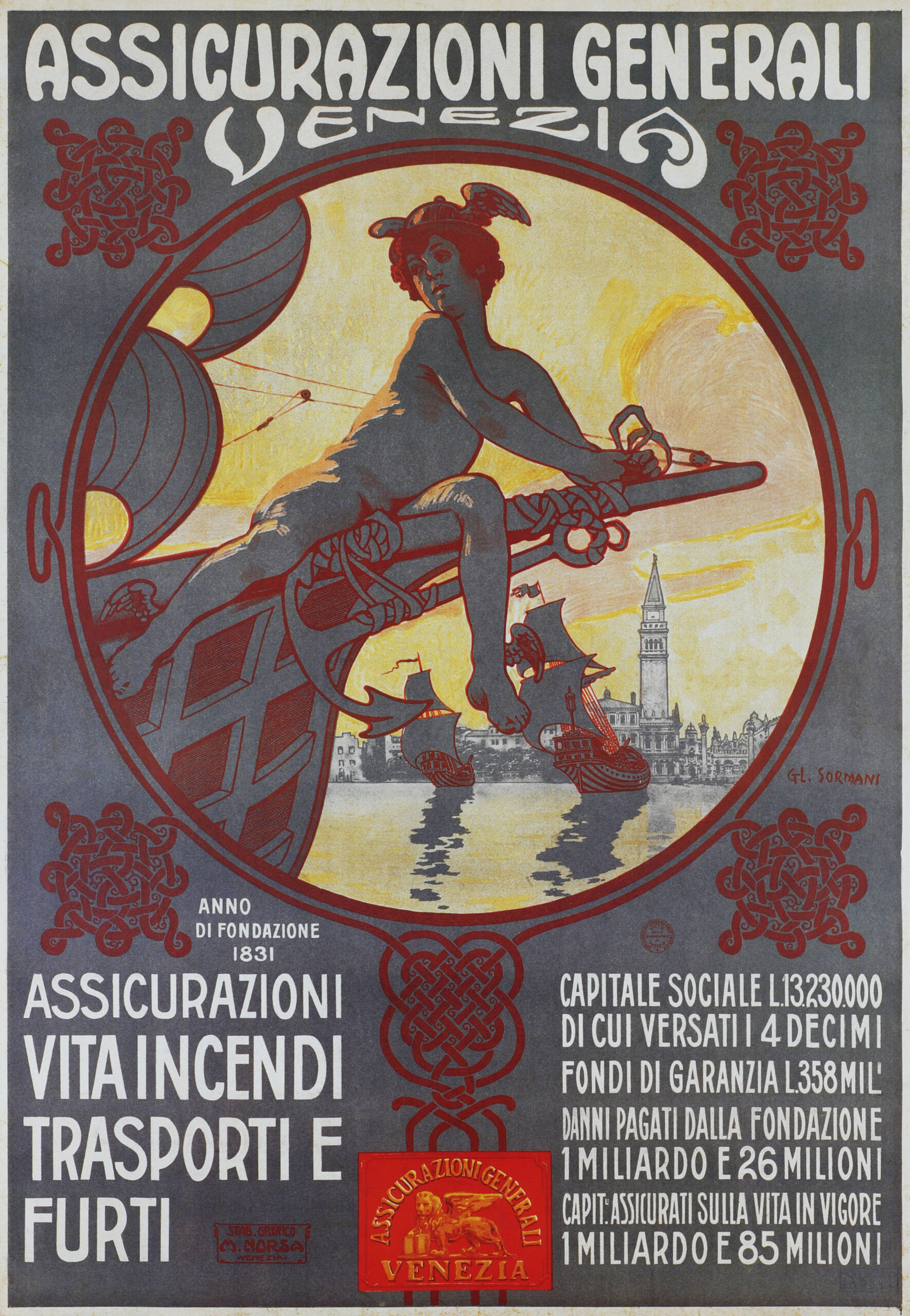 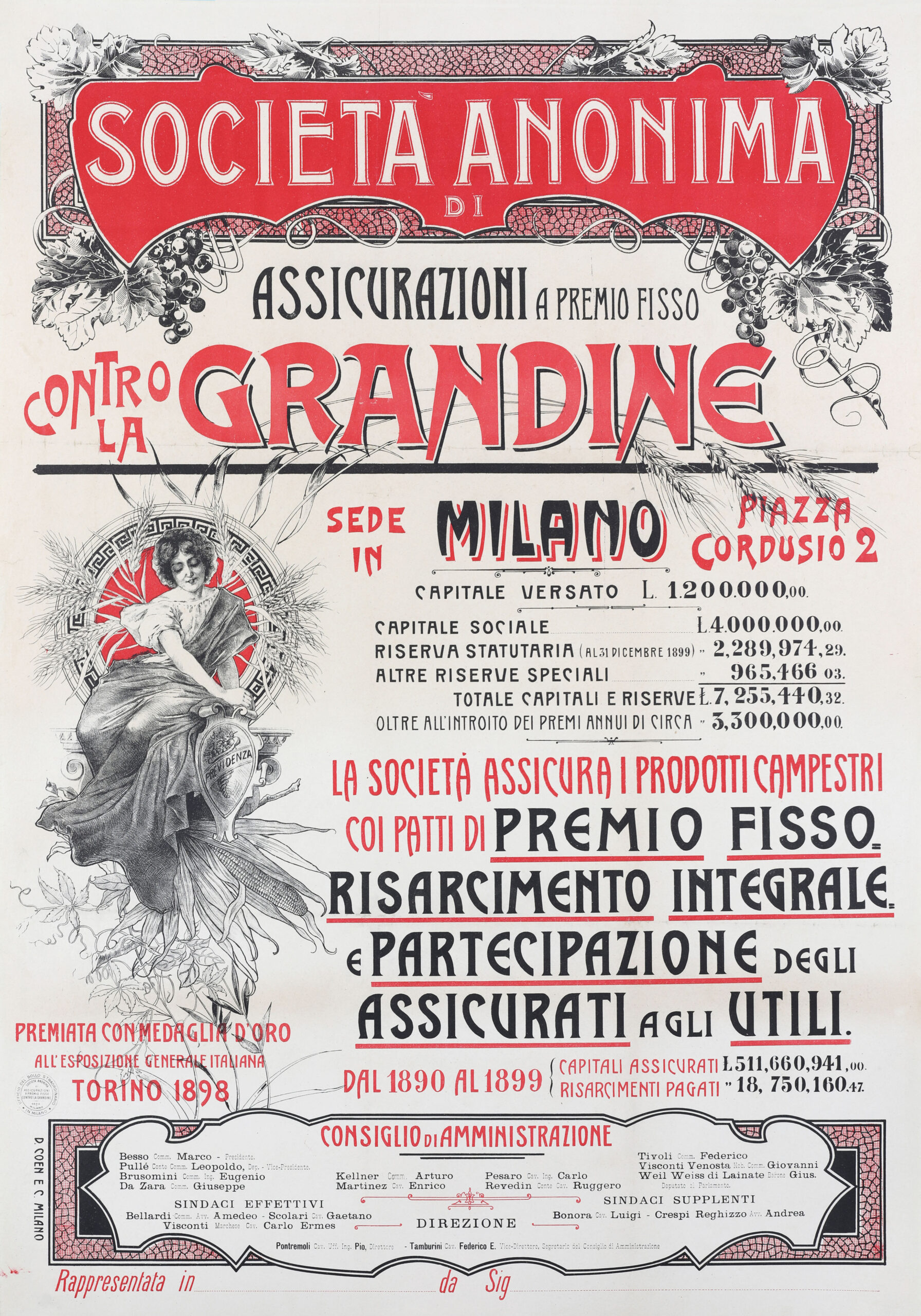 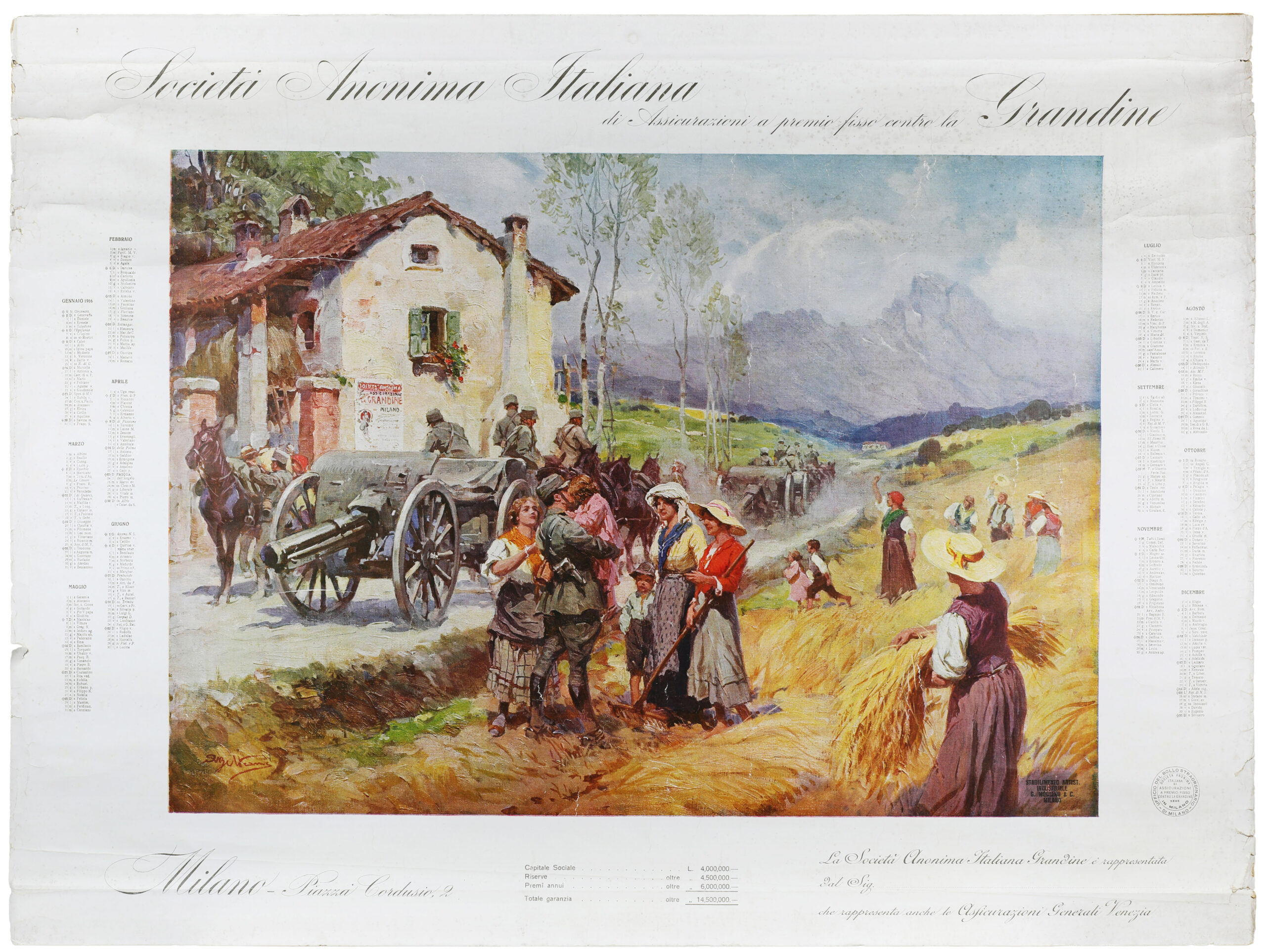 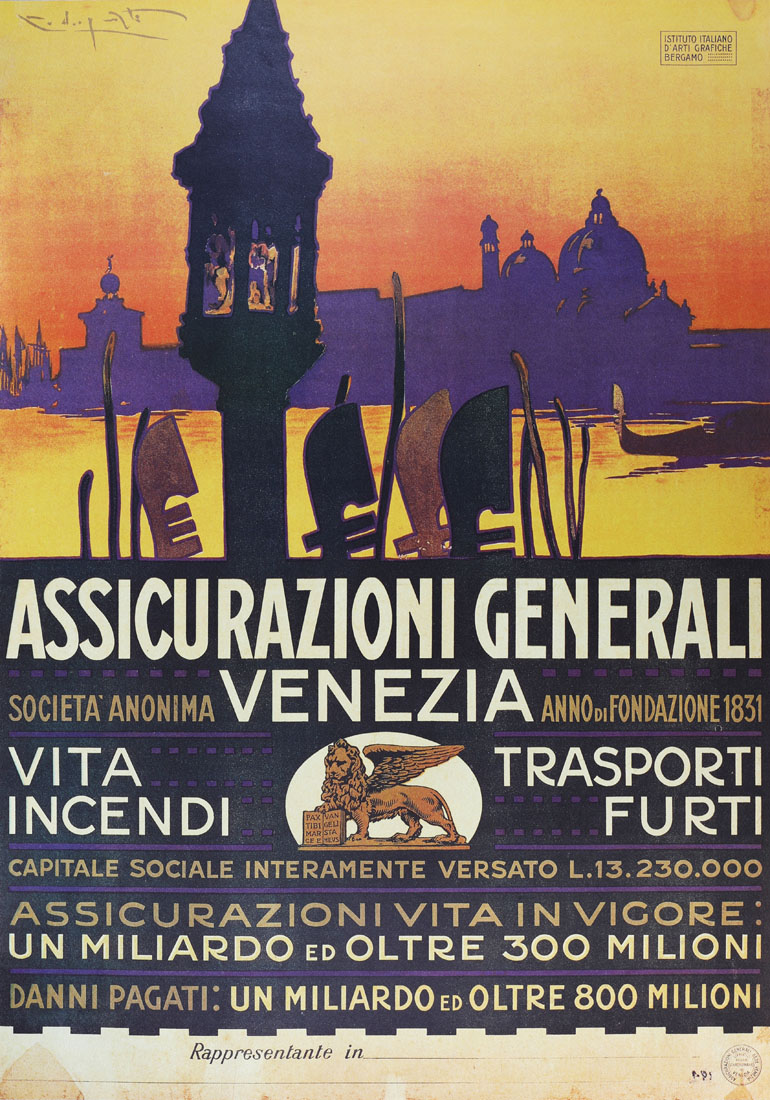 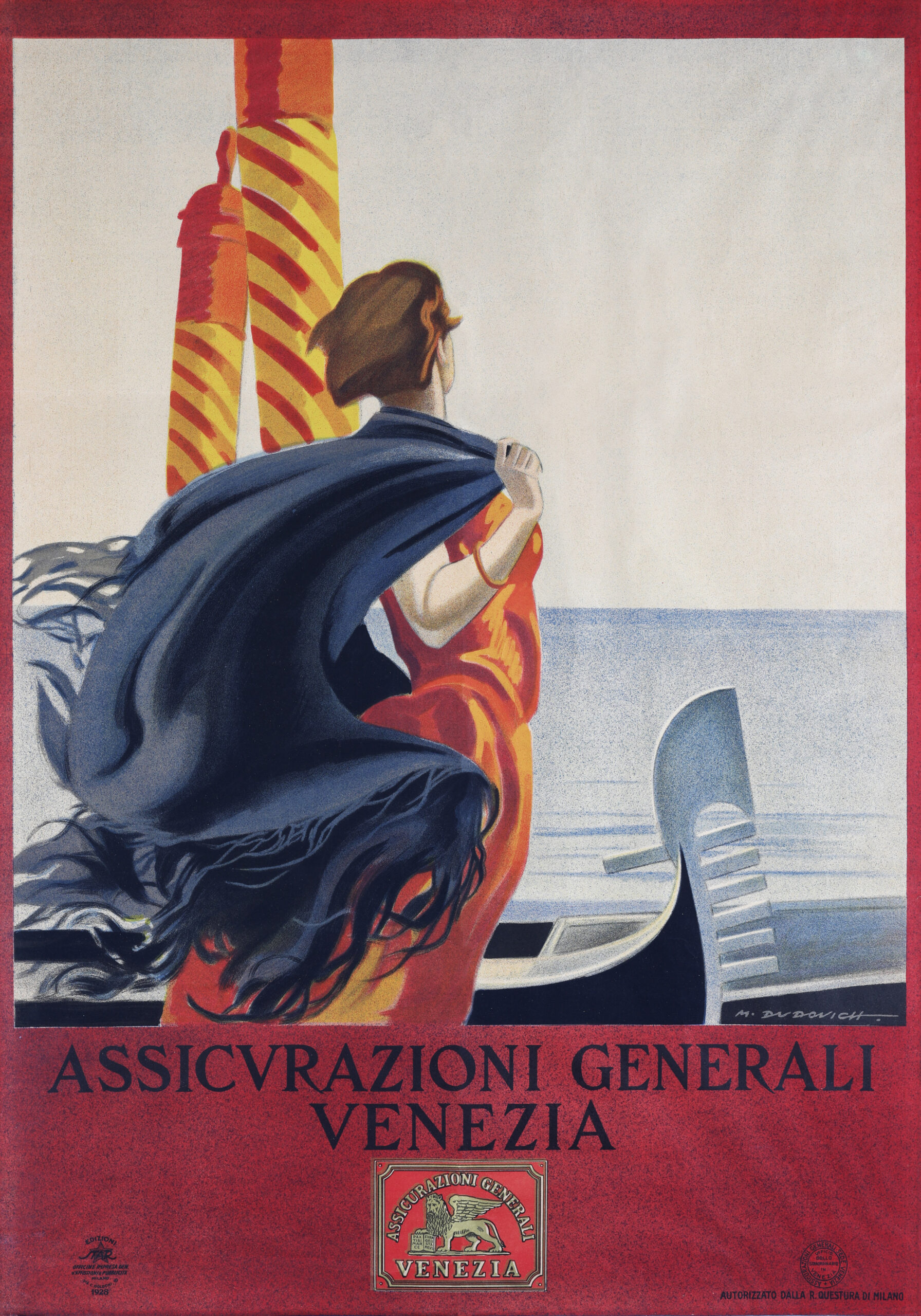 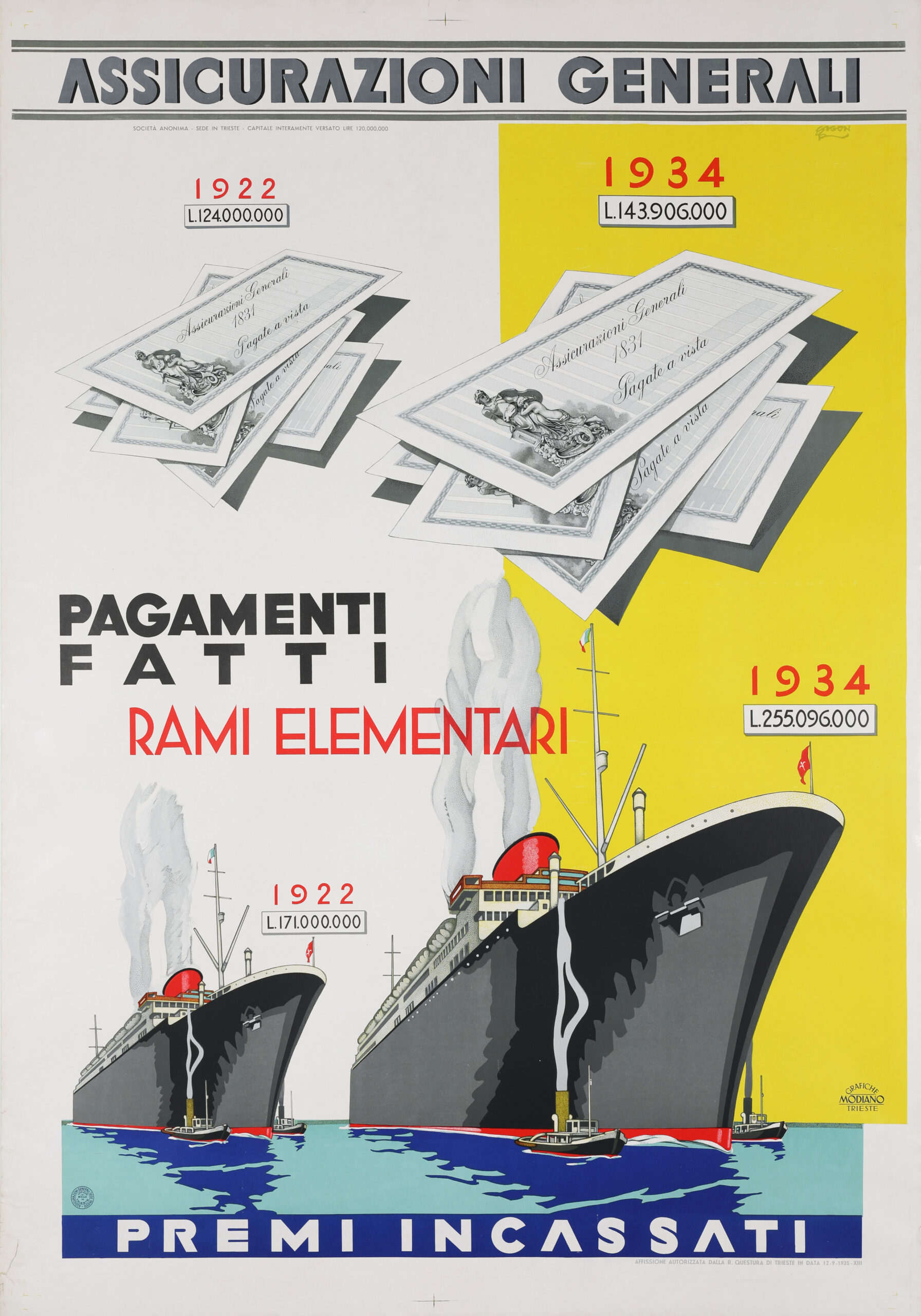 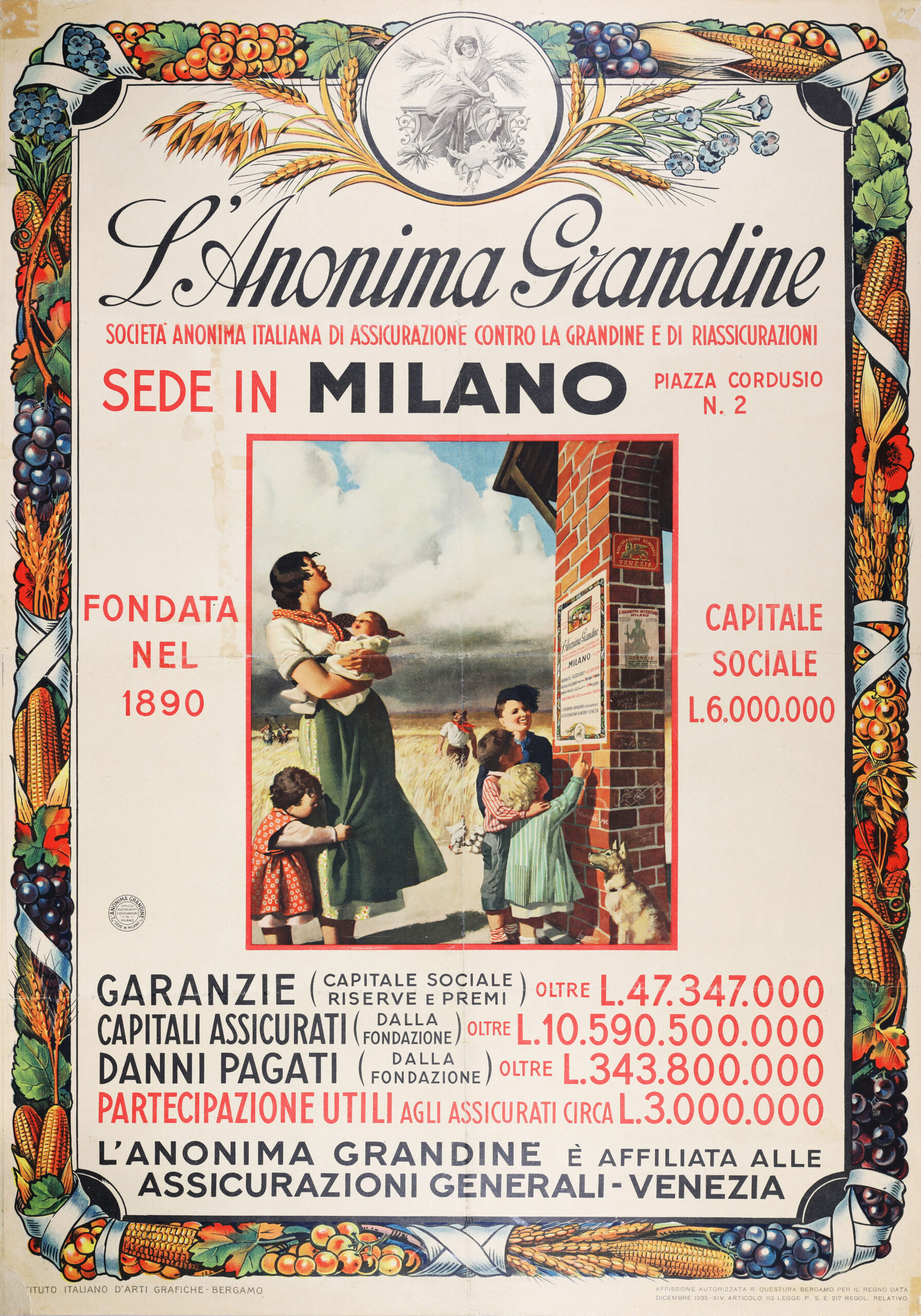 When it comes to marketing communications, a special mention is also due for the Istituto Nazionale delle Assicurazioni (INA). Since its very first days, the INA dedicated itself to spreading far and wide the image intrinsically linked to the historical logo/symbol of Andrea Petroni’s seed-sower. Later picked up by other advertising graphic designers who worked for the INA and remaining in use for over half a century, this image drew on the parallels for the successful outcome of sowing seeds and insurance investment: reliability, resilience and patience.

Alongside the INA’s wealth of promotional and advertising materials, entrusted to important artists and graphic designers from the industry such as Leopoldo Metlicovitz, Plinio Codognato and Gino Boccasile, would later come those of subsidiaries founded in the 1920s and 1940s such as Le Assicurazioni d’Italia (Assitalia), Fiume and Fata.

During the 1920s and 1930s, which marked a sharp increase in its activity, the Rome-based company promoted a wide range of insurance coverage options: family, work, savings, welfare and other areas that were often depicted in the company’s extensive advertising, entrusted to the creative talents of noted poster designers including Tito Corbella, Severo Pozzati (also known by his pseudonym, Sepo), Marcello Dudovich, Gino Boccasile, Adolfo Busi and others.

Standing out prominently in its output are symbolic representations of the moral and social values of Italy at their time; maternity, protecting future generations, and labour, which at the time was largely agrarian. Indeed, rustic symbolism – in the form of trees, sown fields, flowers, bales of hay and ears of corn, not to mention the irreplaceable sower/ploughman – recurred perhaps more than any other in the commissioned posters.

In INA’s visual communication, a collection of posters and wall calendars recalls the company’s work in support of causes in the public interest: posters by Corbella and Walter Resentera illustrate how the necessary investments to promote policies endorsed by policyholders were channelled into socially beneficial projects. Following the First World War, for example, the INA promoted insurance models linked to the national loans issued in 1918, 1920 and 1927, which are reflected in the patriotic imagery. 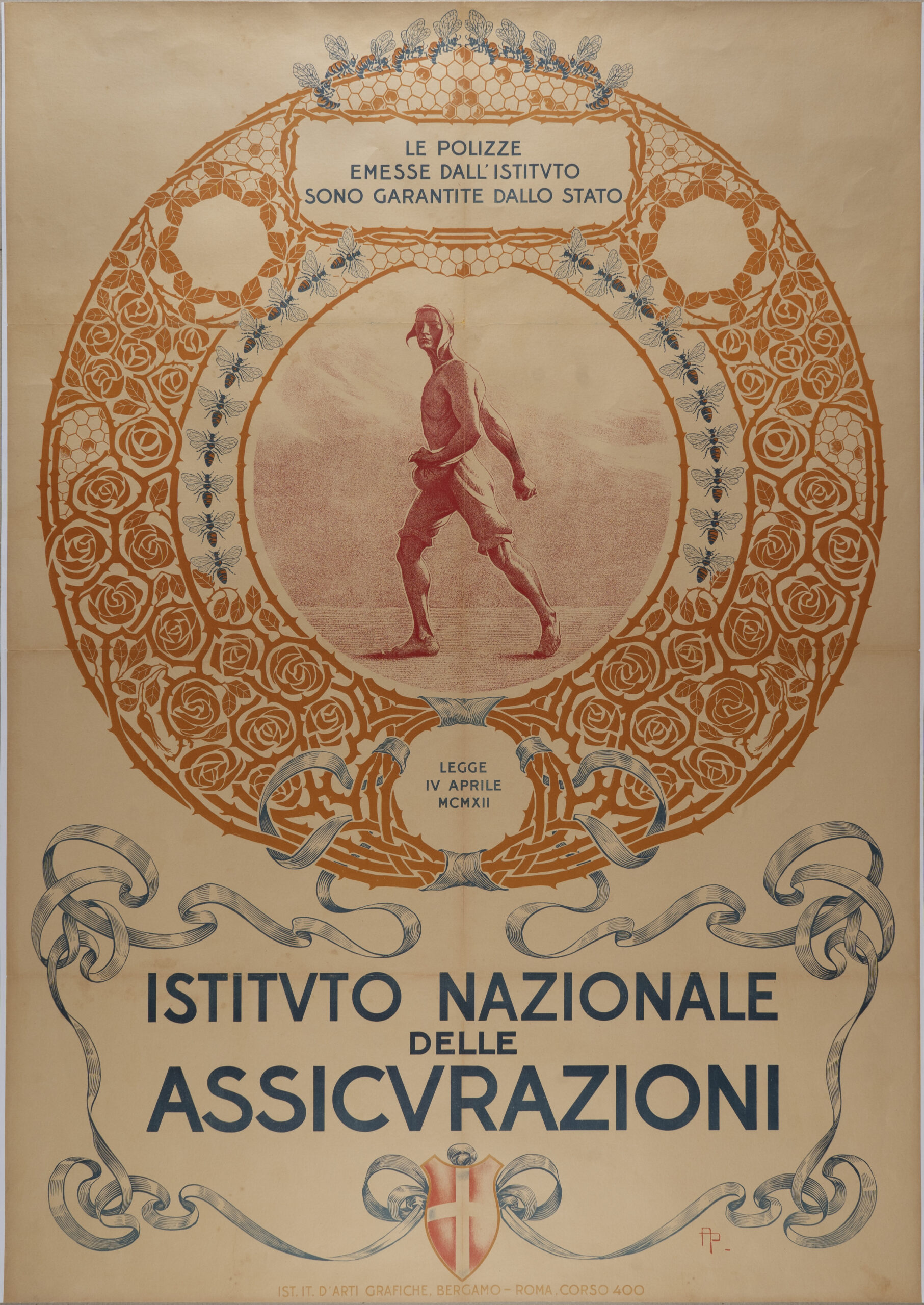 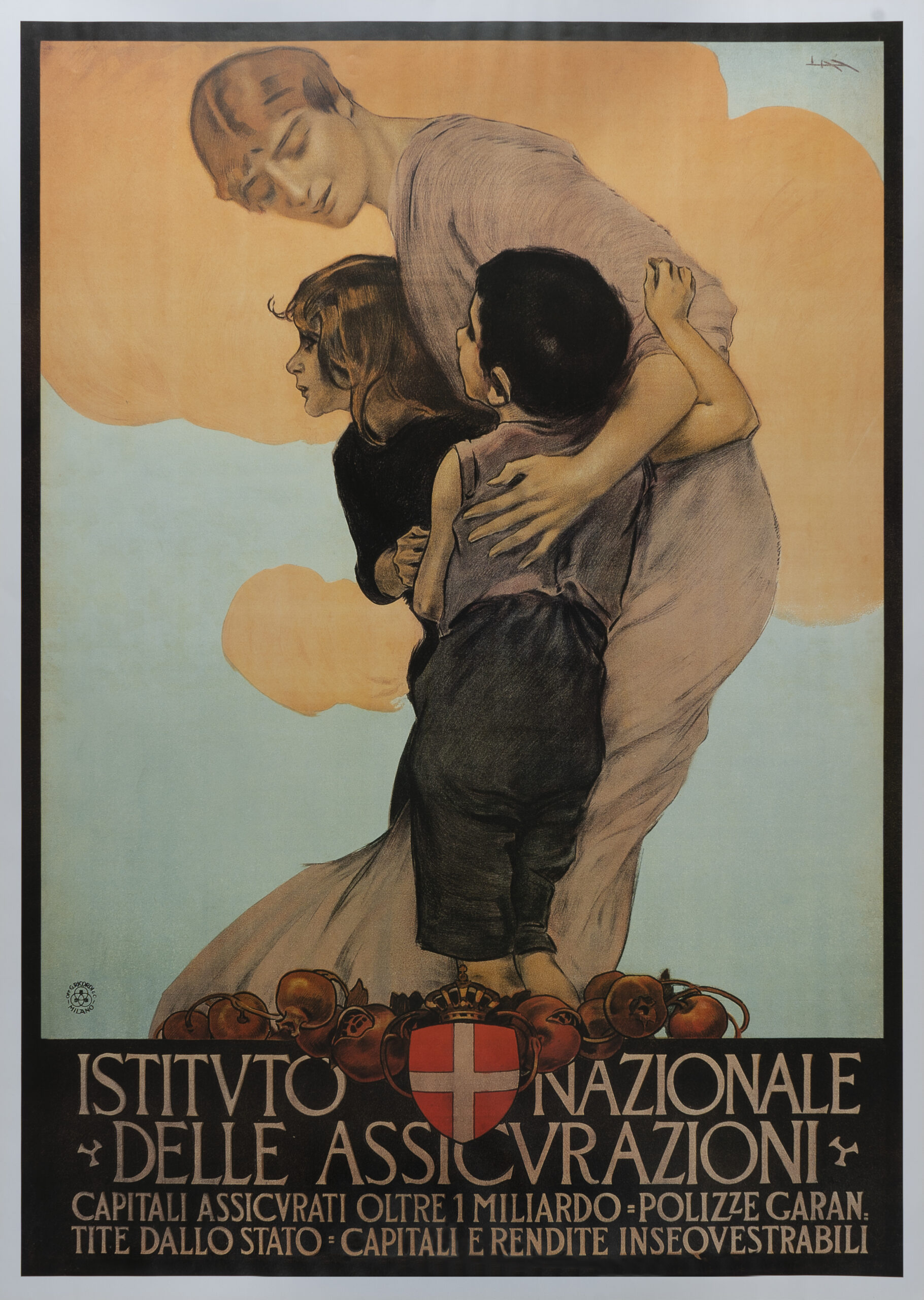 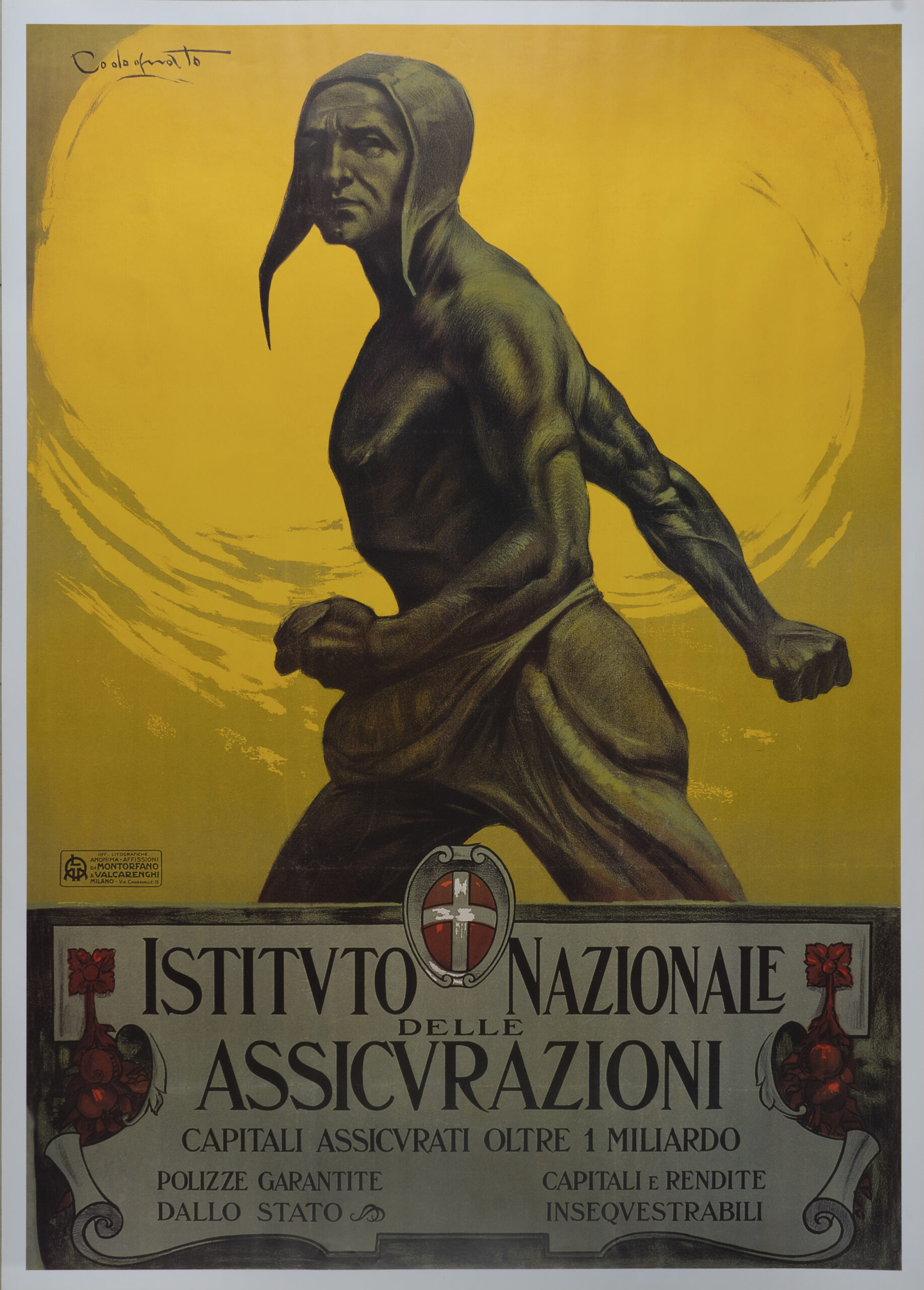 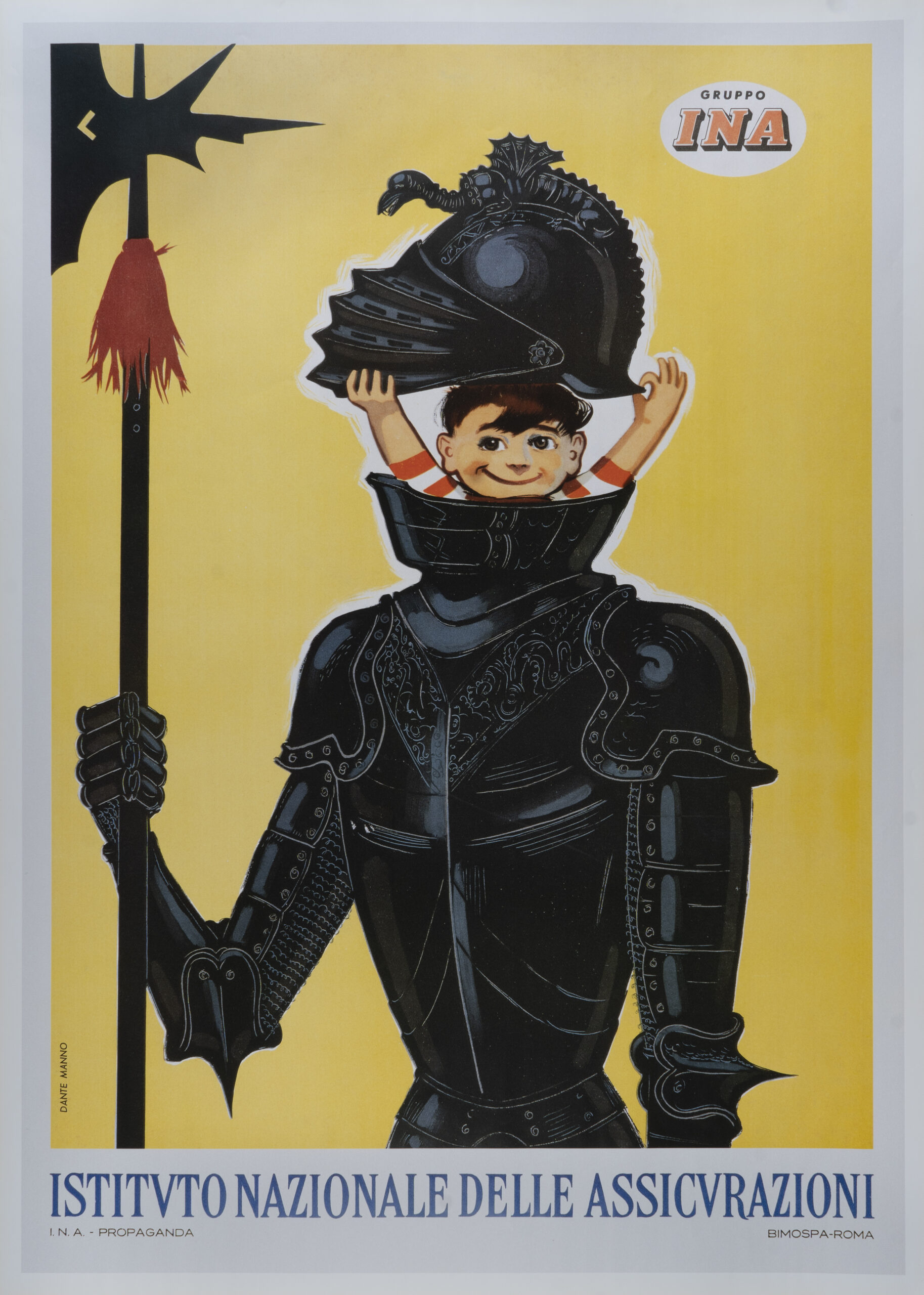 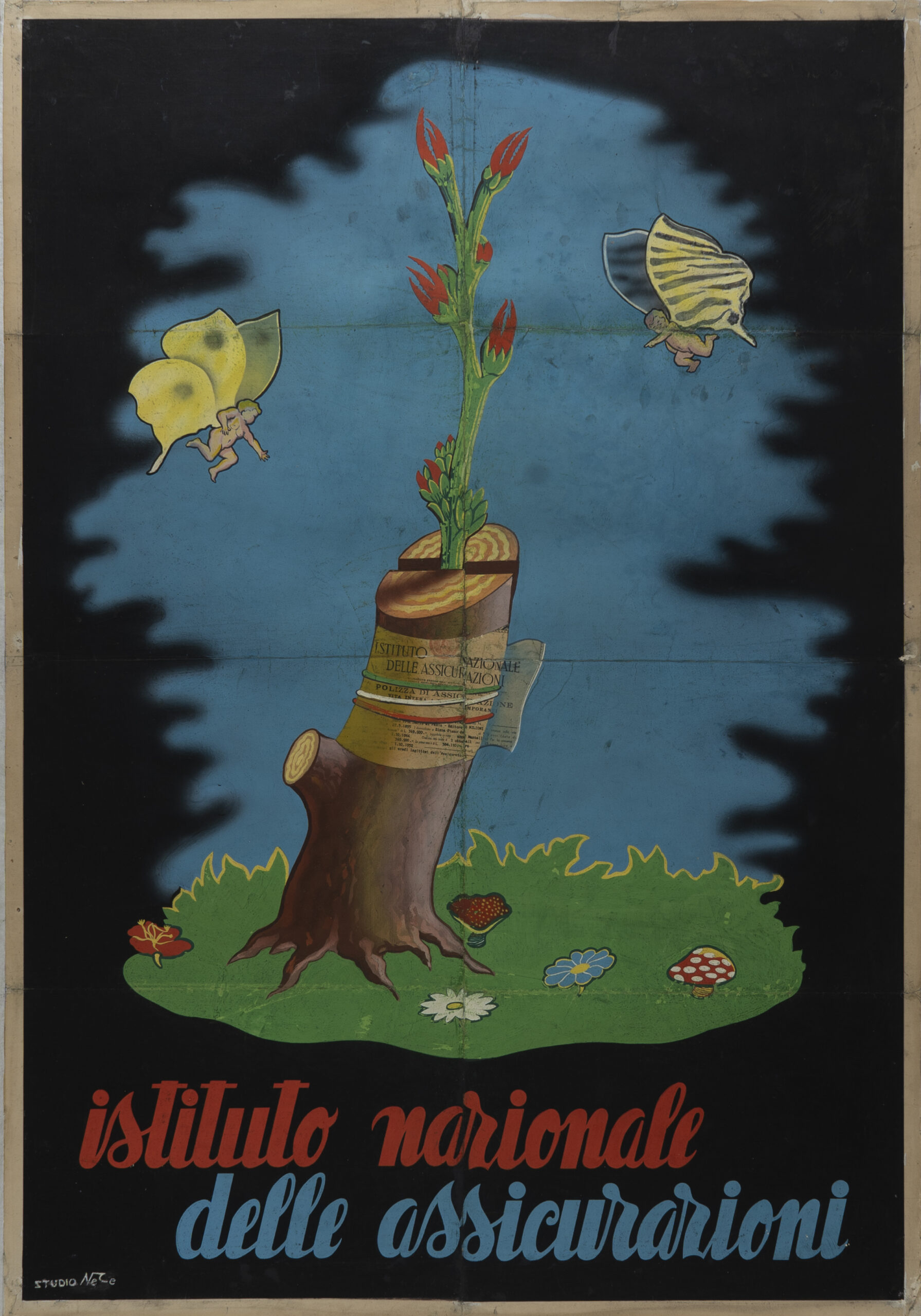 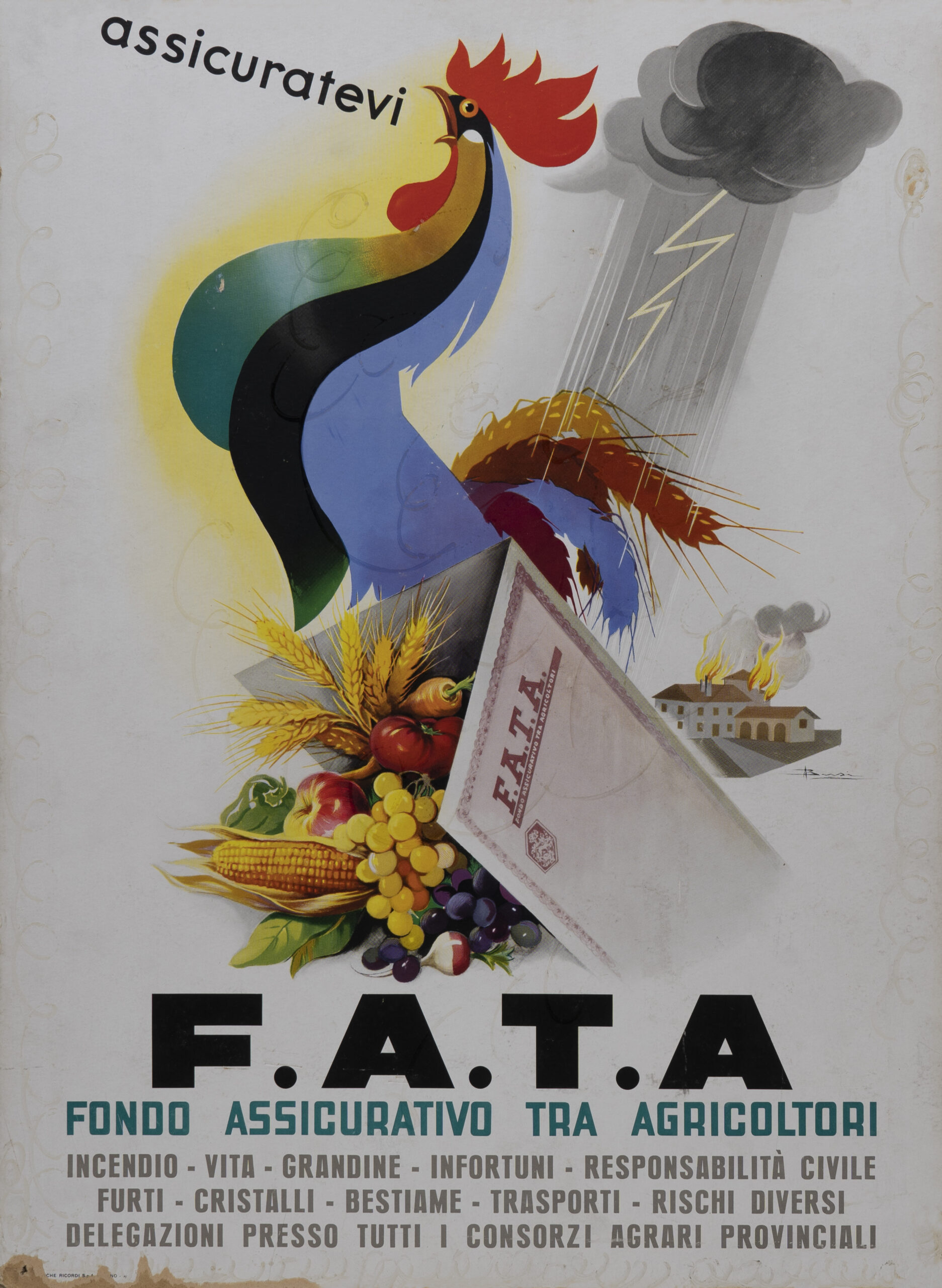 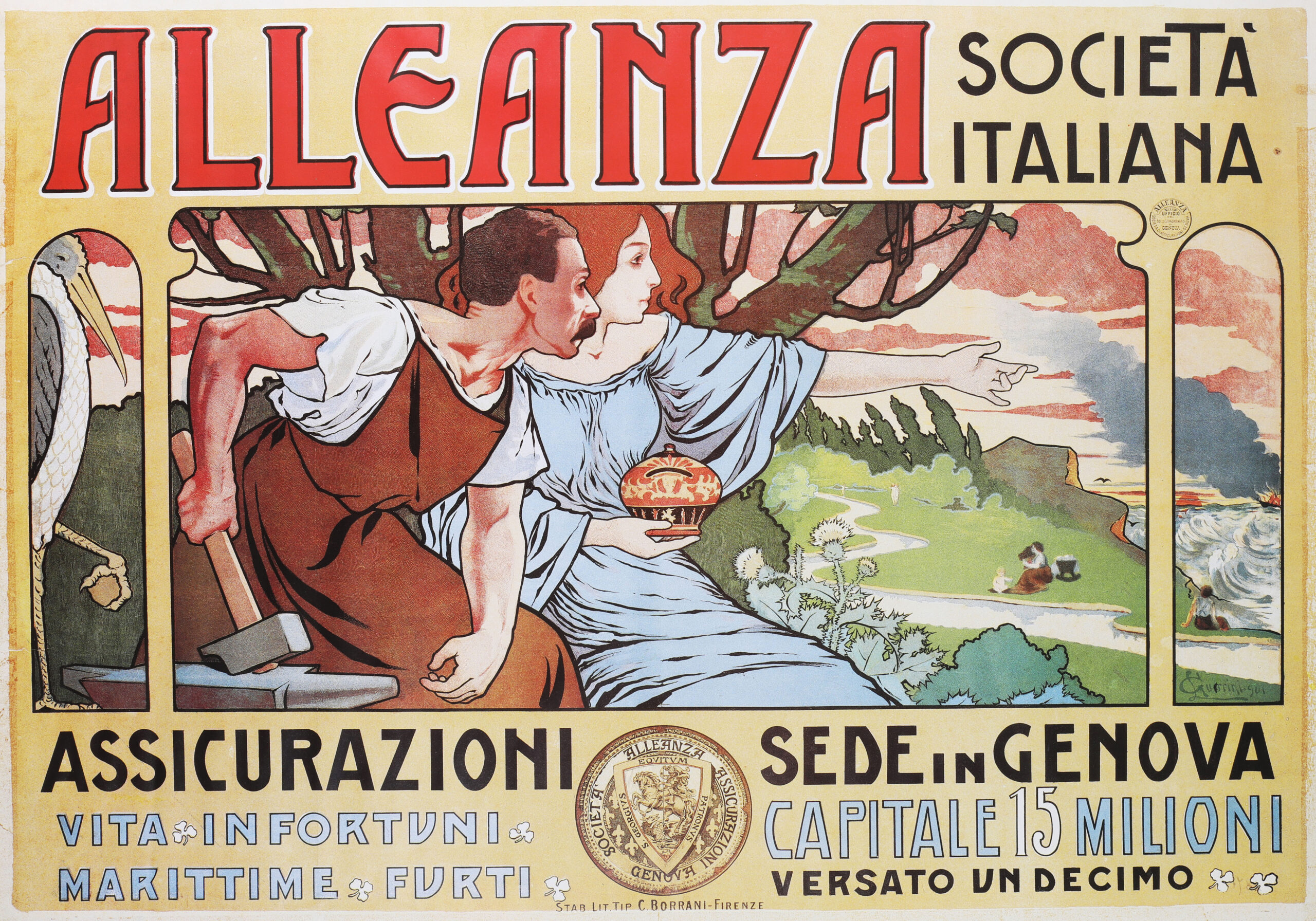 Consumer research-led marketing techniques were first introduced during the economic boom years of the 1950s and increasingly so in 1960. This led to a subsequent shift towards figurative language that was sharper and more engaging, such as the advertising offering of Dante Manno, and primarily more direct and with a clear social message.

The documentation regarding historical promotional activity carried out by Alleanza Assicurazioni, founded in Genoa in 1898 and incorporated into the Generali Group in 2009, is represented in the Generali Archive by posters from the early 1900s signed by Giovanni Guerrini, which clearly recall the Art Nouveau style.

For some European companies, either created or acquired by the parent company at various stages, it has been possible to collect evidence from the relevant historical periods regarding the promotional and marketing activities.

Noteworthy among these is a poster designed by Paul Verdussen in 1897 for Les Patrons Reunis, a Belgian company founded in 1887, acquired by the Group in 1989 and subsequently absorbed into Generali Belgium, and posters for La Concorde, founded in Paris in 1905 and today part of Generali France, which favoured text-based communication, often encased within architectural and floral borders.

A powerful source of inspiration, these posters told and continue to tell the tale of trends and tastes in society, its desires and aspirations. Throughout its history, Generali has collaborated with leading illustrators to interpret contemporary life and changes, innovating by employing figurative codes and providing images that have become a part of history. It is a tradition that Generali is celebrating and reviving as part of its This is Tomorrow project, marking 190 years since the company’s founding. From the creative prowess of six international artists – Tim Lahan, Craig & Karl, Gérard Dubois, Alena Skarina, Elena Xausa and Max Guther – all of whom interpret subjects tied to the Group’s core value of sustainability (Link to This is Tomorrow exhibition), come six new and contemporary posters for Generali.