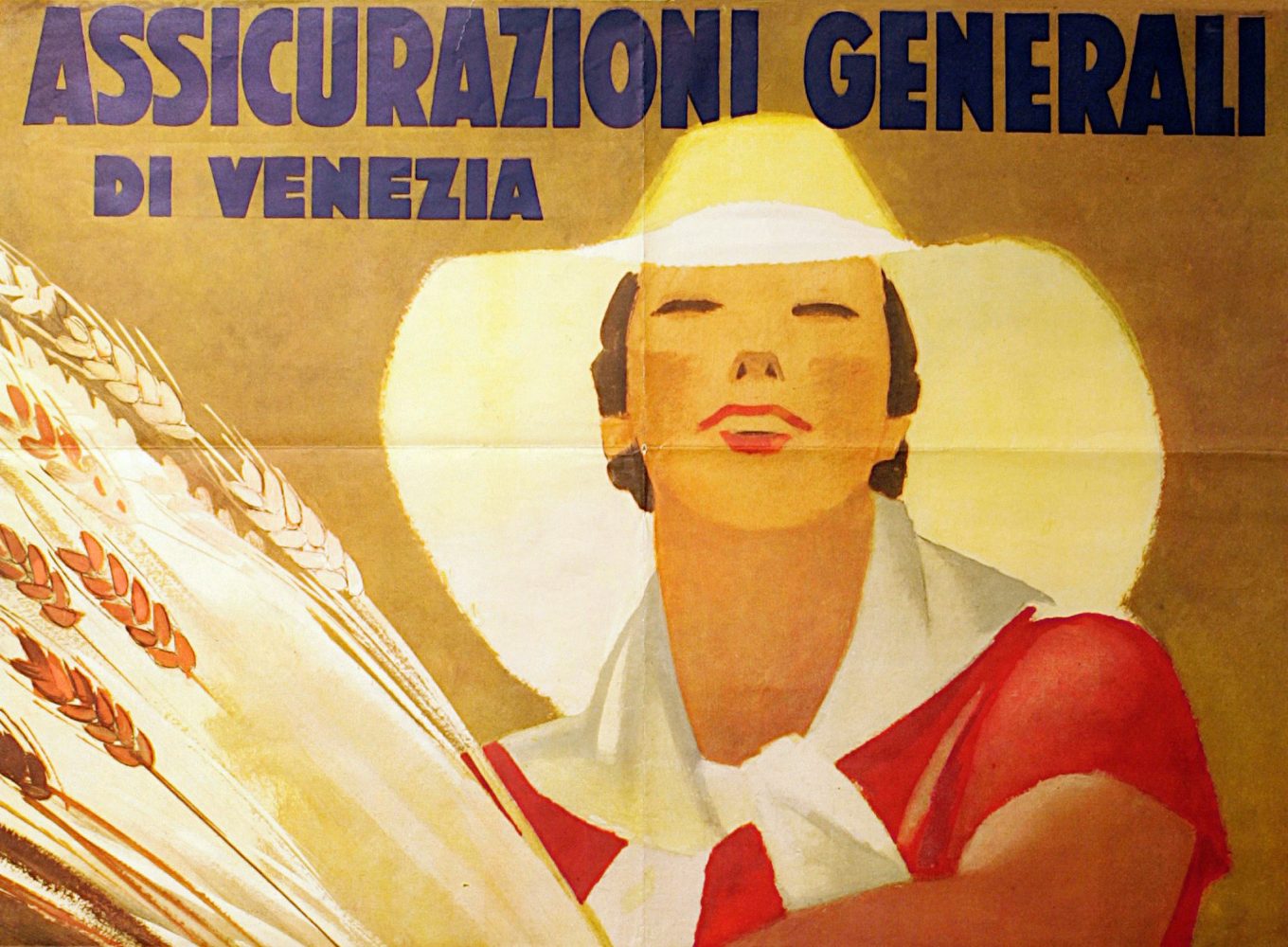 The figure of a female farmer wearing a wide-brimmed hat, a big smile on her face, one arm outstretched with a wheat stalk held firm in its grip and a scorching summer sun suggested in the background: a powerfully relaxing and reassuring reminder that the harvest is safe from damage and likewise the associated income. It is a clear and compelling message delivered by a salt of the earth woman with a no-nonsense yet elegant appearance and essence, who almost seems to step off the poster.

This poster was used to advertise “insurance against grain fires on the sheaf”, created for Generali by Marcello Dudovich in 1938. The same subject inspired the artist in a 1926 poster, and a reworked version also appeared on the cover of an INA informational pamphlet for its 1934 “rural policy”.

Marcello Dudovich (Trieste 1878 – Milan 1962), an illustrator who gained global renown especially from the early 1920s to the mid-1930s, was one of the leading protagonists of “mural art”. His representation of grain insurance almost invariably makes reference to the sheaf of grain, one of the most recognisable symbols of insurance—a service which is generally not easy to convey through visual means. In this case, however, the grain represents not only the fruits of the investment in insurance coverage (with echoes of the classic allegory of sowing and harvesting, rooted in the 19th century), it is also the product being insured, with the nature of the policy clearly stated on the poster.

Printed in chromolithography, this poster is characterised by the basic and clean design language of the image. These are typical features of Dudovich’s elegant style—a contemporary marriage of form and colour—a unique and unmistakable artistic footprint made possible by the boldly simplistic elasticity of its subjects, which nonetheless conveys an image of order and formal precision. The essential style of this illustrator-painter was chosen to communicate the transparency and efficacy that are core brand values for an insurance company such as Generali.

As with most of his artistic output, here too Dudovich places a female figure front and centre—as so often the undisputed star of Generali visual communication in the 19th century and now of the mural advertisements, and indeed as is still the case today in television advertising. The artist’s admiration and enthusiasm for the female figure led him to revive the sense of feminine mystique in his posters. Their enigmatic nature is expressed in the essential nature of the lines—never superficial, always delicate—the result of a sophisticated encapsulation that eliminates anything redundant and leaves only a soft, gentle depiction of the essence. The farmer with the wheat stalk testifies to Dudovich’s preference—which becomes increasingly evident in his output from the latter part of the 1930s—towards the kind of stylised and volumetric forms that typified the Italian Novecento [a 20th century Italian art movement].

The period that followed would look vastly different in the realm of visual communications. Artistic design and drawings would be overshadowed by the rise of editorial, photographic, television and cinematographic advertising.

As another of the leading protagonists of 20th century Italian graphic advertising, Leonetto Cappiello, said: in this poster too, Dudovich was able to “call a name out loud, and through the clarity and pleasant forms, the element of surprise and the novelty of the arabesque, the intense colours” make this farmer an unforgettable figure. Indeed, she is as timeless as the summer sun in front of which she stands, proud and welcoming.