My First Tooth: Generali’s “Little Advert” for Children and Families

Generali first began to make use of advertising materials such as posters, pamphlets, flyers, calendars, almanacs, and diaries to highlight the company’s insurance products and activities in the late 1800s, around the same time as the invention of modern four-colour printing.

One particular genre of advertising was linked to children and childhood. It all began with one of the earliest documents published by Generali and held in its Archive: the short story Per i nostri bambini (“For Our Children”) written by Generali agent Napoleone Panerai to promote the company’s life insurance, at a time when this branch was being heavily promoted by then-secretary general and future president of Generali, Marco Besso. This morality tale, published in 1883 and illustrated with intricate drawings and decorations, follows children in Florence who have fallen on hard times and are left without food to eat following their father’s passing. 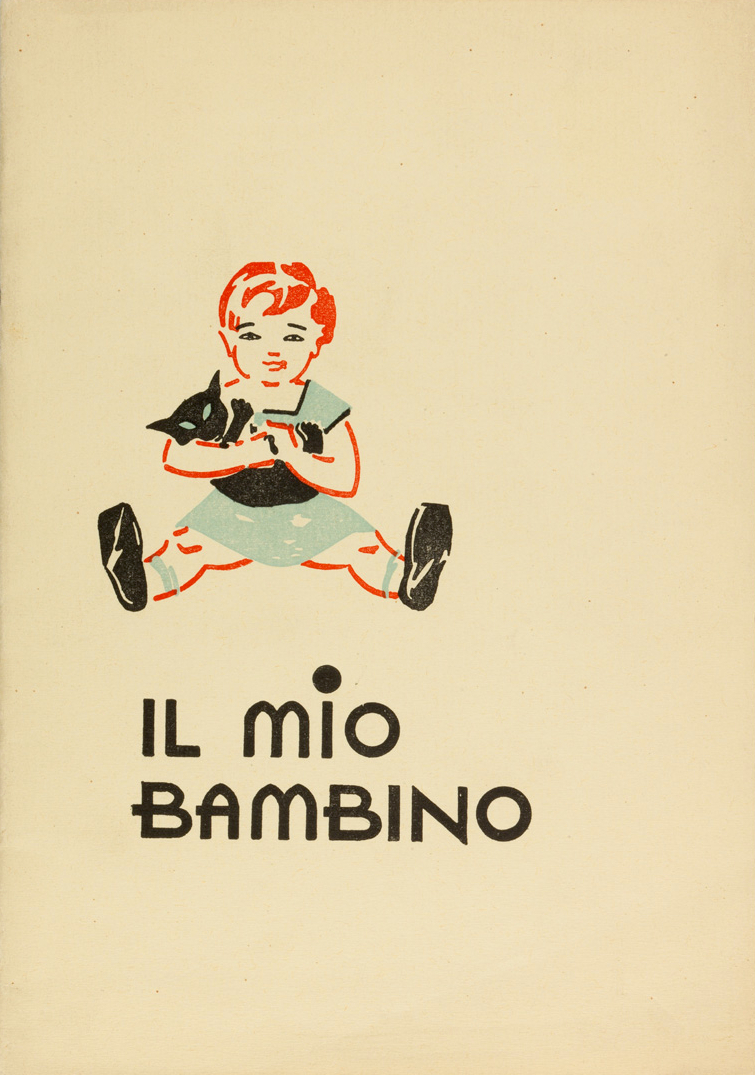 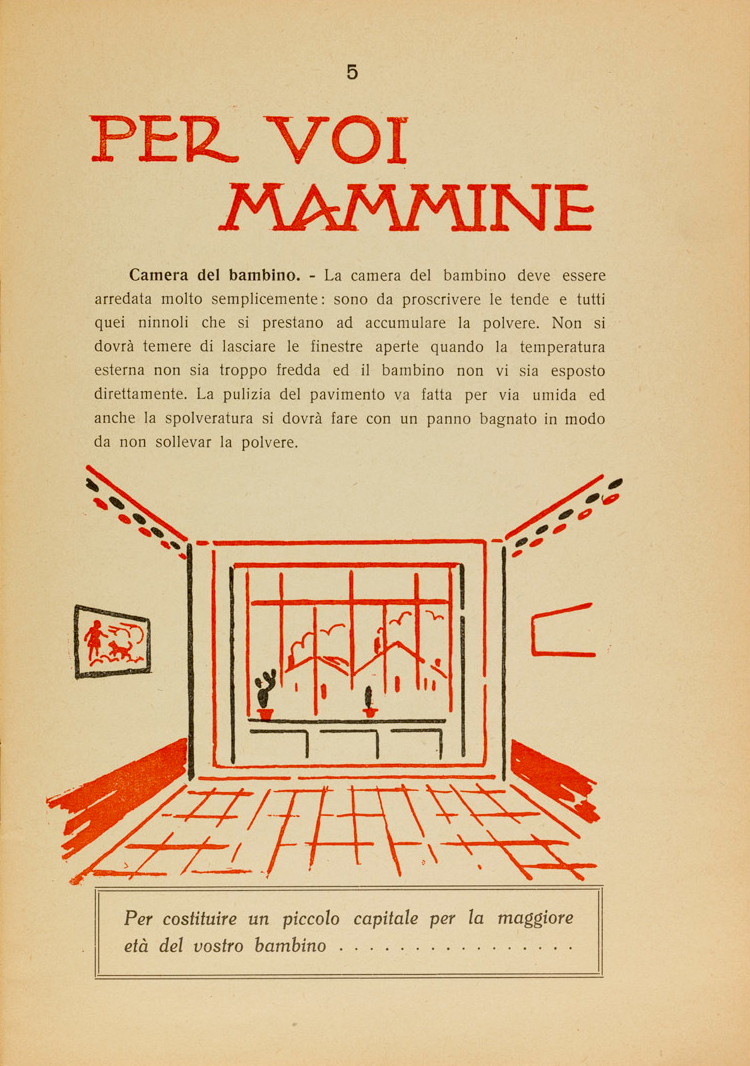 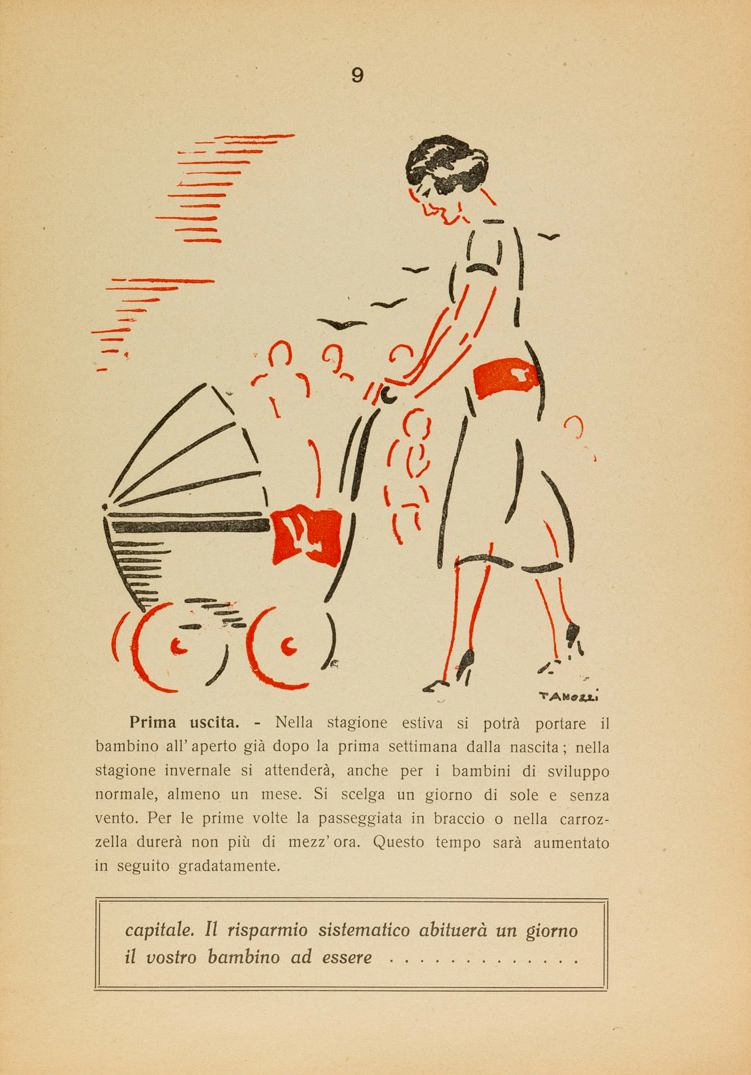 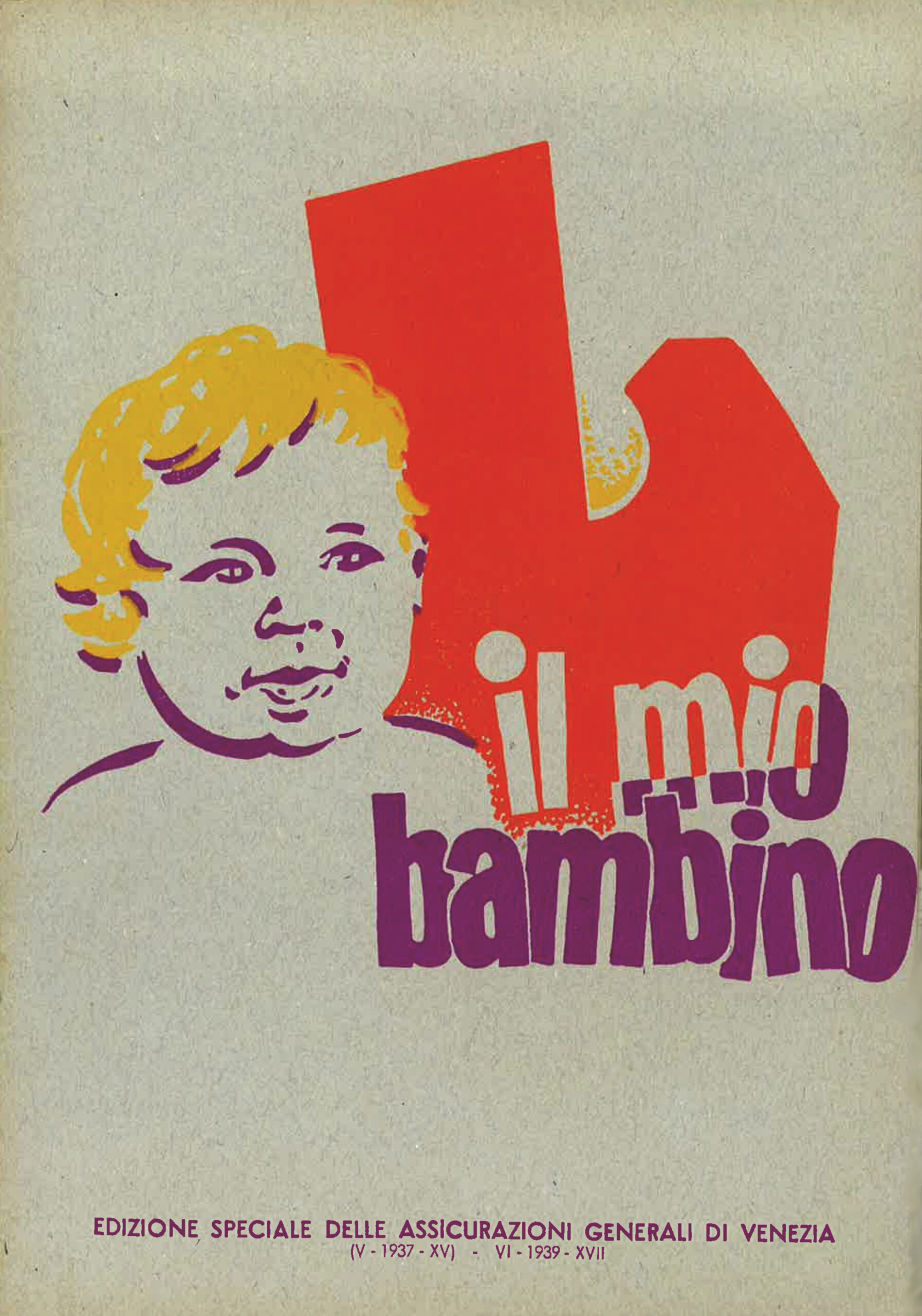 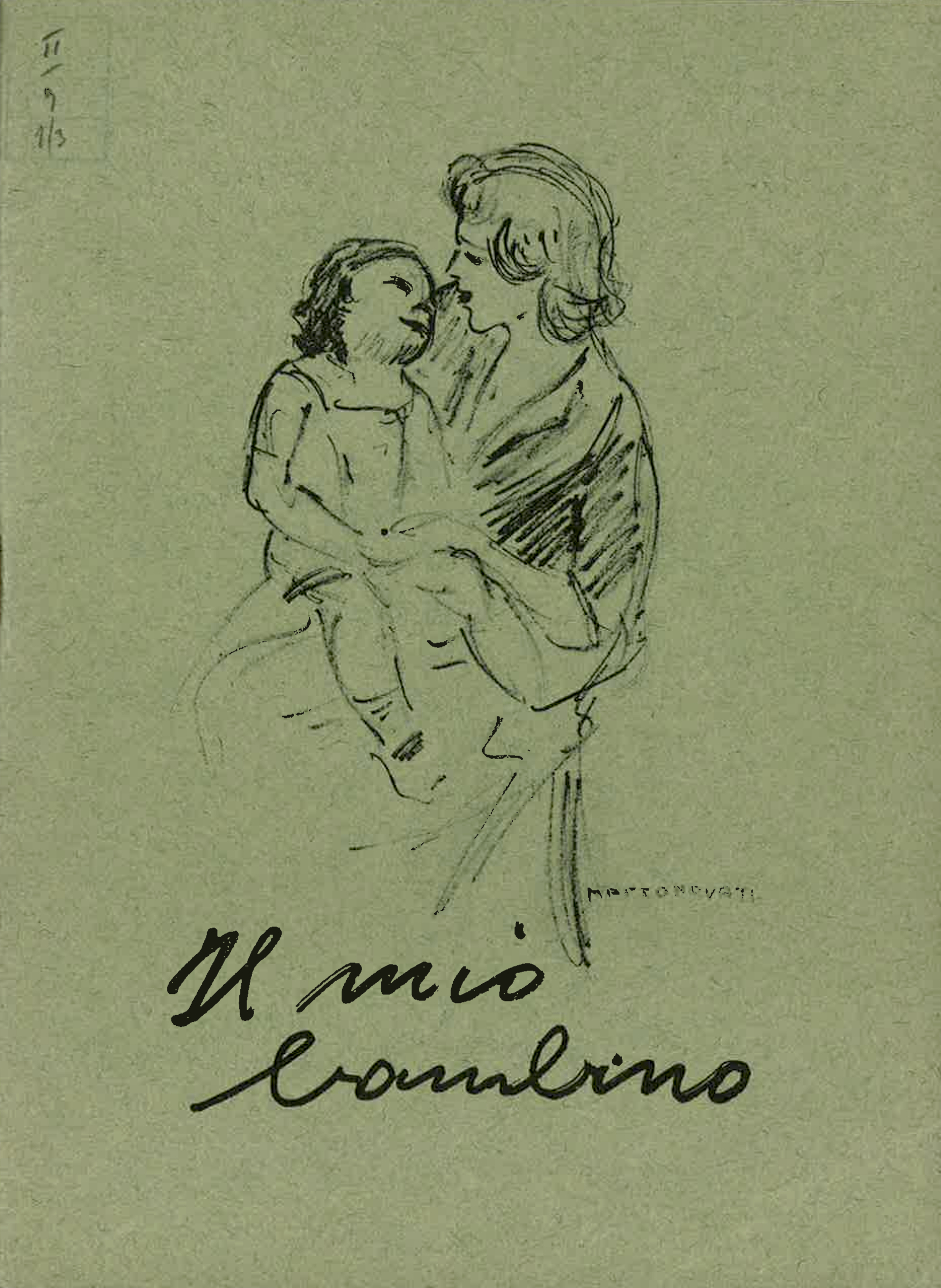 In later decades, beginning in 1933, as research into child care increased, Generali began publication of a pamphlet entitled Il mio bambino (“My Child”). Aimed at new mothers, this pamphlet came in various editions, including several in foreign languages. Illustrations were provided by Gorgone Tanozzi, who was also responsible for several other advertising campaigns for the company. The booklet collated a list of tips for taking care of the new-born alongside reflections on the importance of ensuring the necessary insurance provisions. The last page was left as a space for parents to add notes on the development of their child over the first months. As subsequent editions went to print, the “baby diary” came to occupy a more prominent role.

This trend continued until the sixties and seventies, when Generali published the booklet Dalla tua nascita (“From Your Birth”). The illustrations in this booklet recall Charles M. Schulz’s comic strip Peanuts, and it was designed exclusively for adding photographs and anecdotes of the child’s first years of life, with only a single advertisement on the first page – a humorous take on the company’s iconic winged lion symbol.

Small in size, but useful and appreciated by families and unquestionably effective as a promotional tool, this publication continued to enter family homes until a few decades ago, where it remained for many years, and often a whole lifetime. The vibrant and striking graphic design that brings the pages of this little book to life is the work of Marcello Scarpa, a designer from the period who drew inspiration from comic strips and new techniques that were popular in America to create a new advertising tool that is unmistakeably Italian. This little book – created in at least two different versions, one a simple black and white and the other in vivid colours and with slightly different content – was created with an implicit intention to encourage the parents to consider taking out an insurance policy to safeguard their child’s future. At the same time, it also offered a simple family photo album with space to stick photos or to write short anecdotes and comments on pages dedicated to special days in a child’s life – birth, baptism, first steps, stages of growth, first tooth, character traits, friendships, birthdays, first days of school…

More a gift than an advert in the traditional sense, it demonstrates the Generali Group’s commitment to stand by its policyholders through thick and thin, and to be their life-time partner. 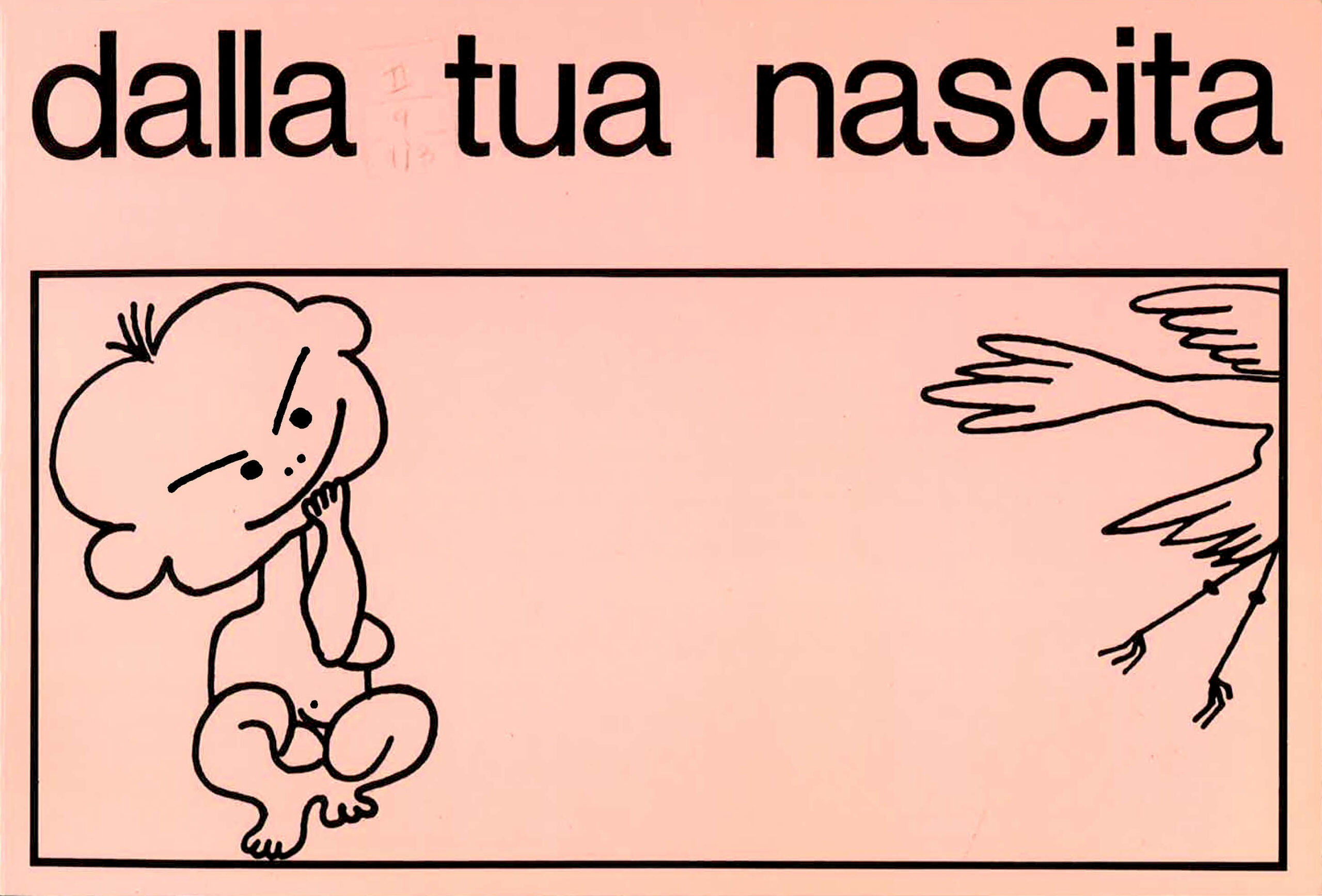 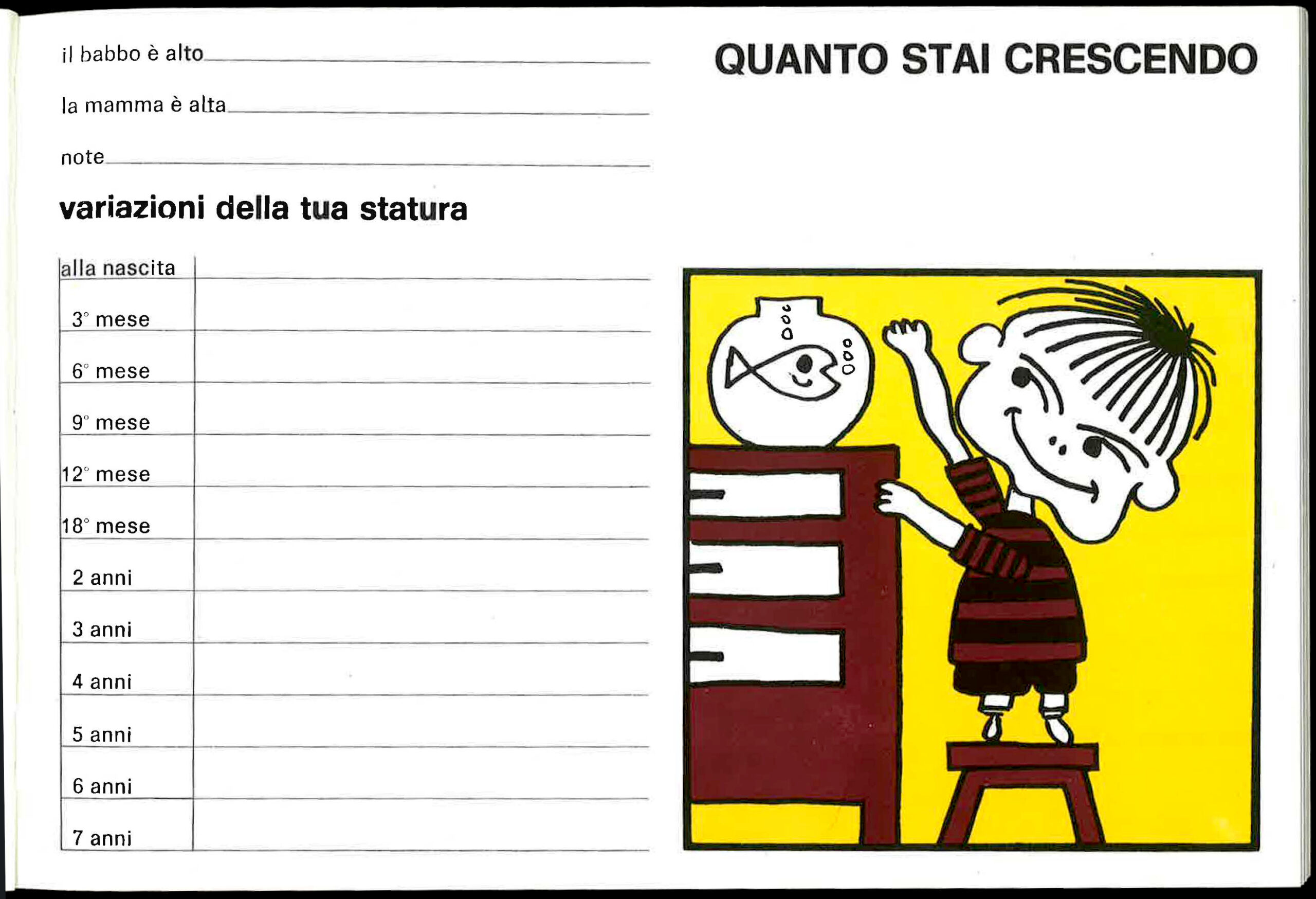 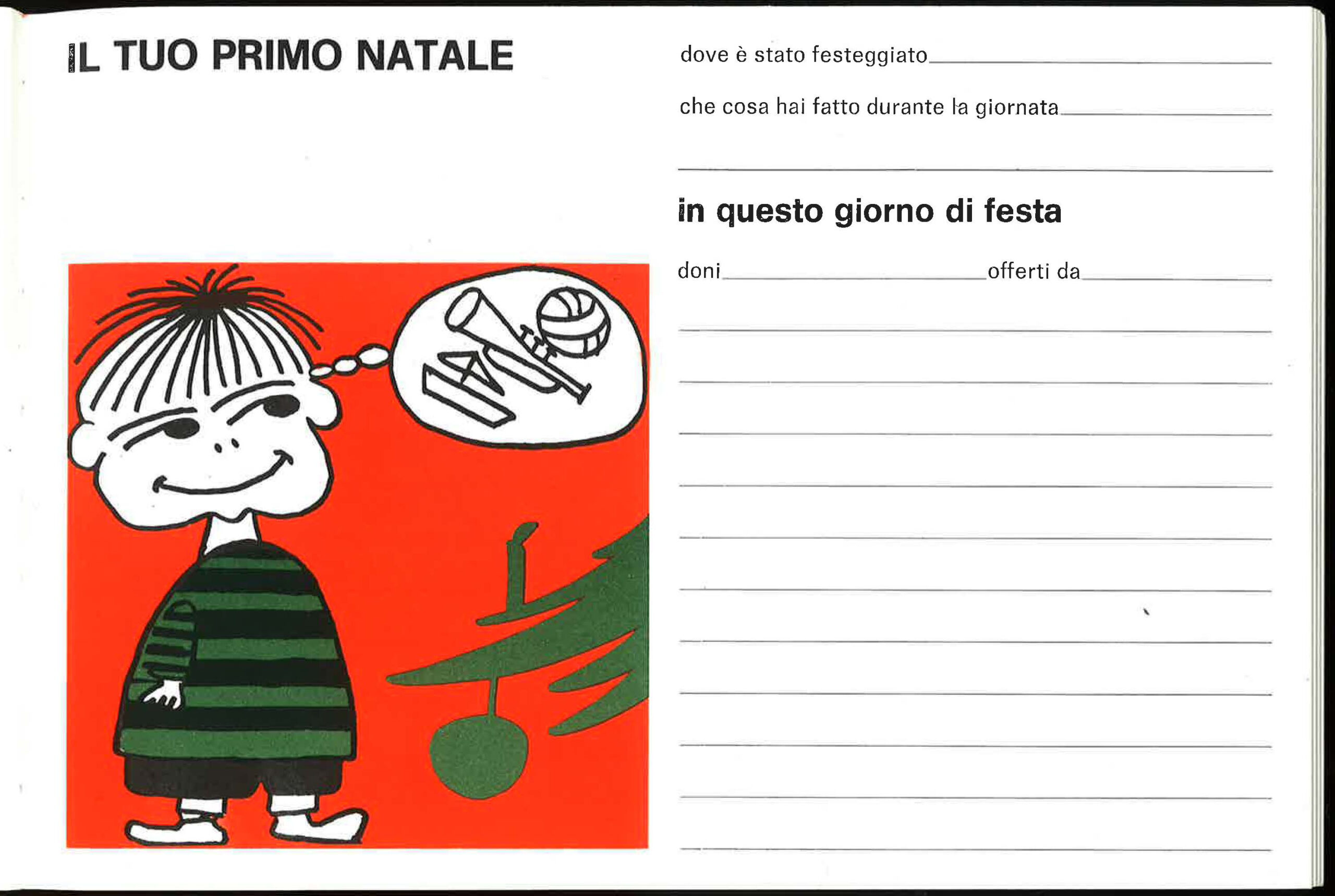 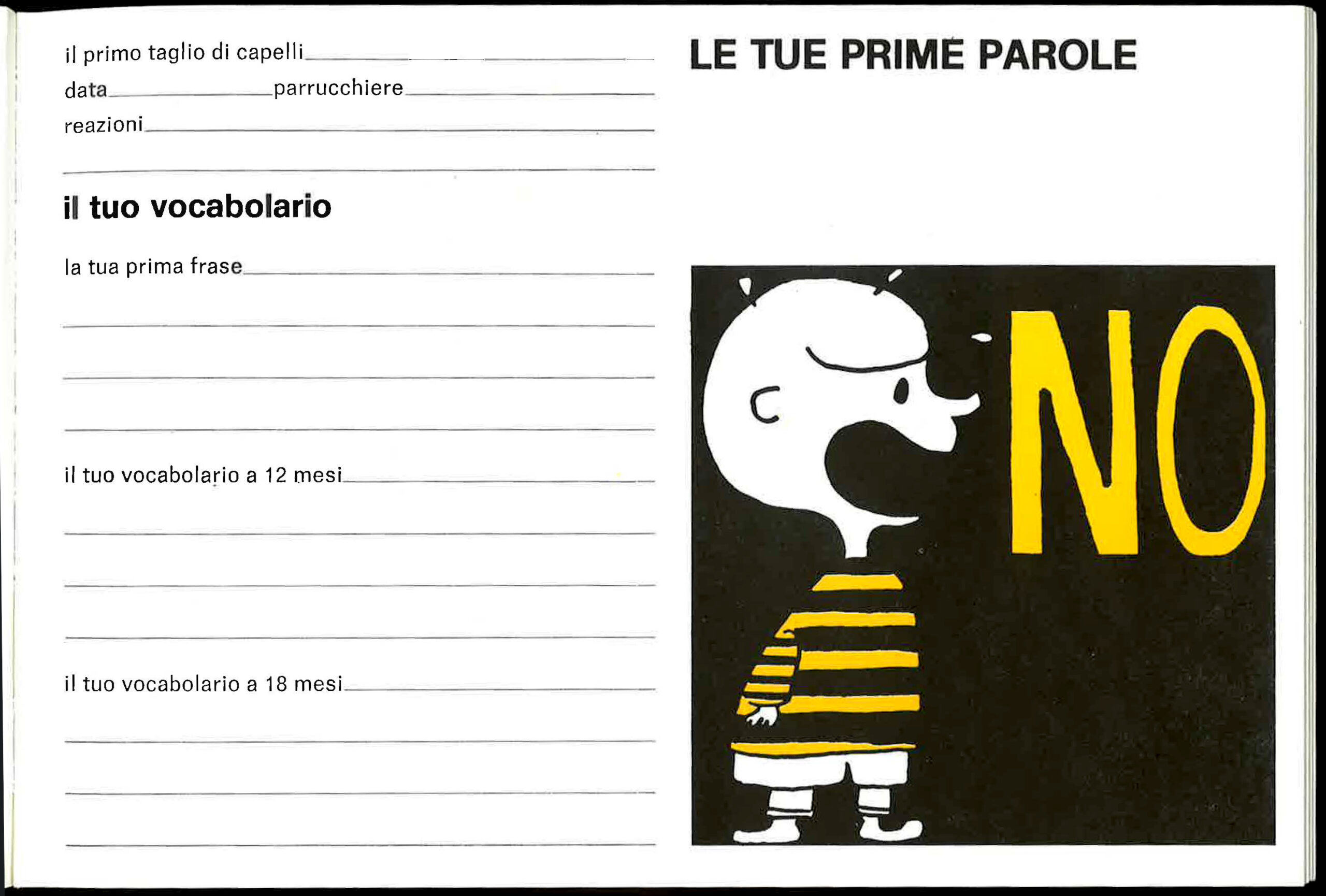 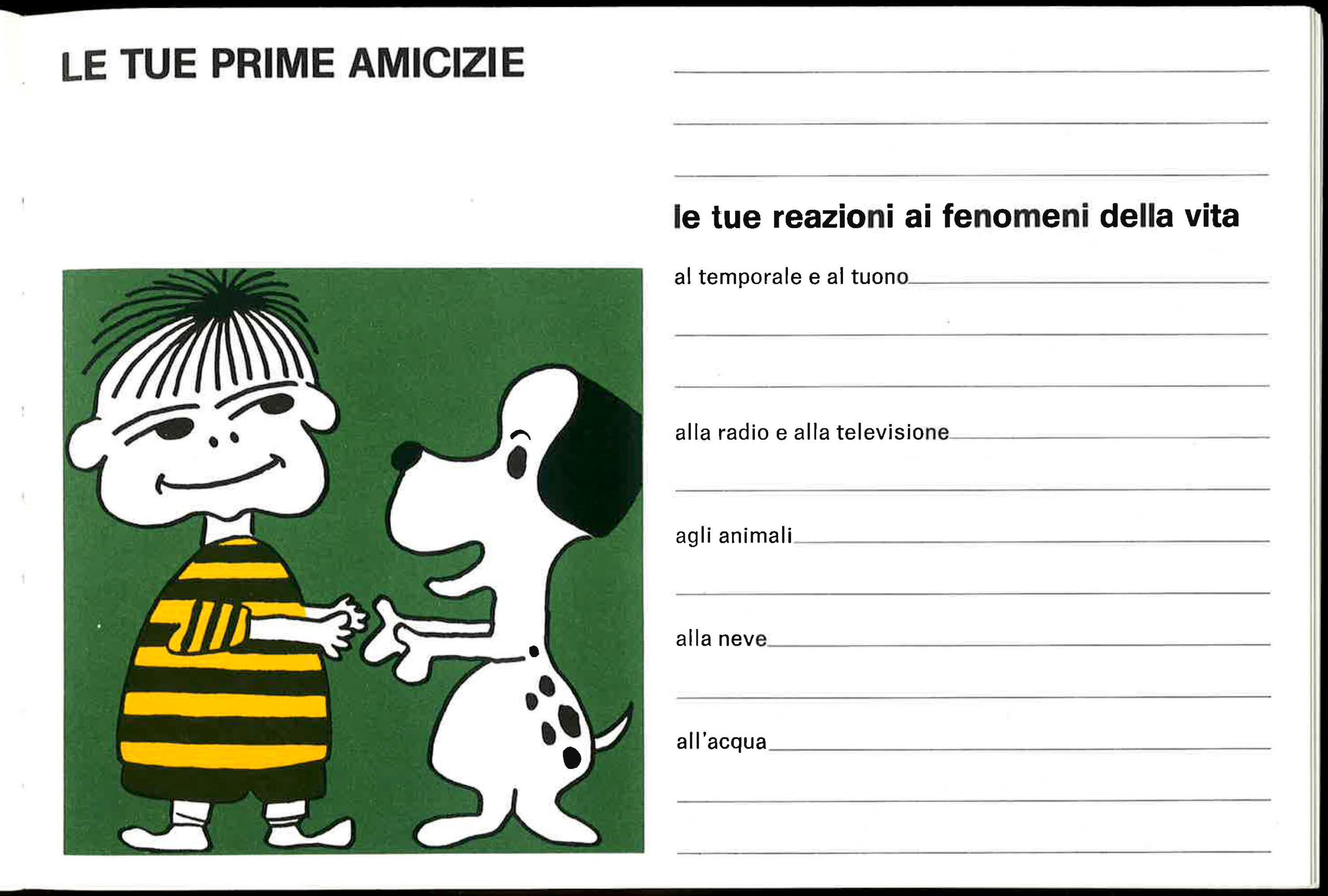 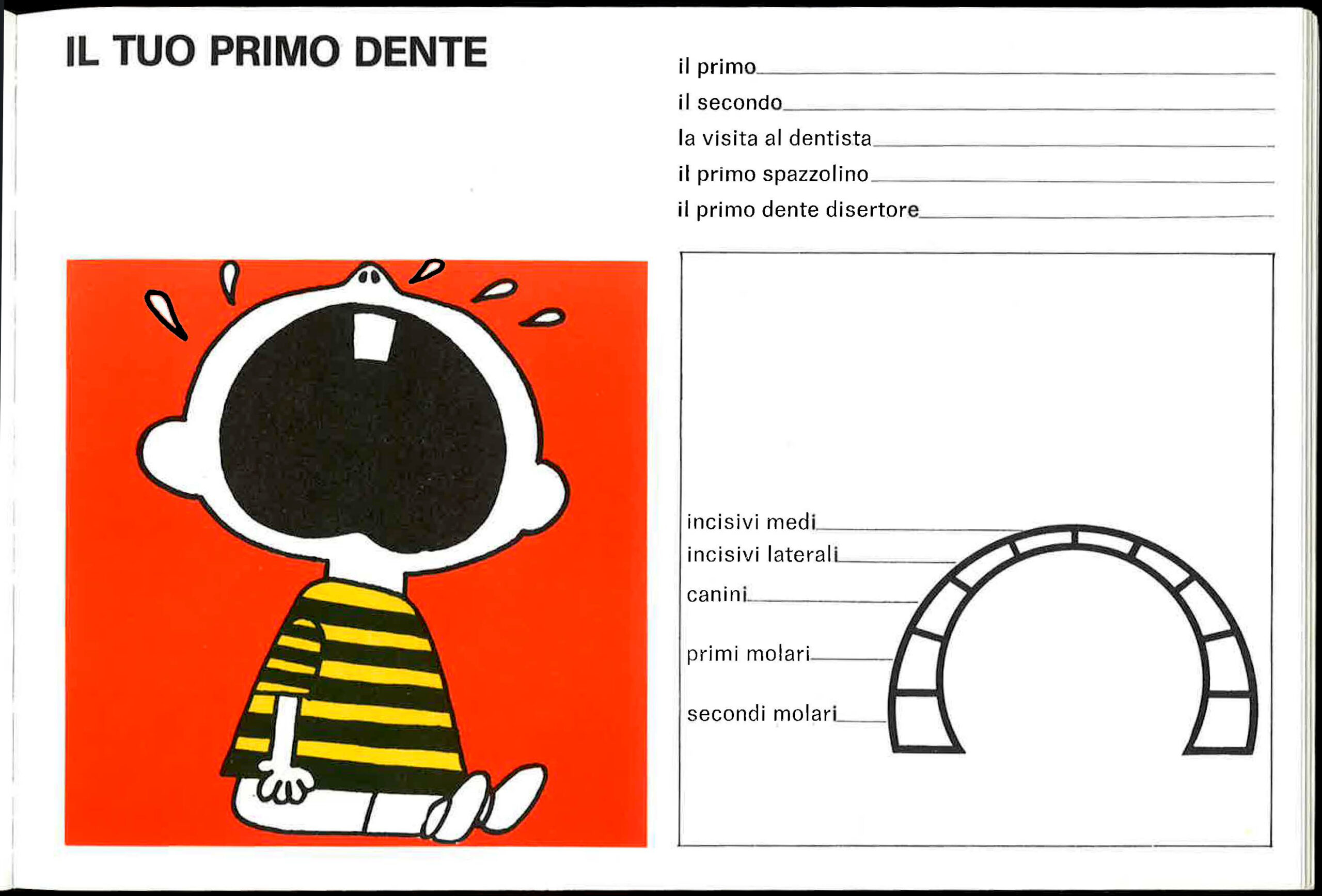