From the moment of its founding in 1912, the Istituto Nazionale delle Assicurazioni (INA) began laying the groundwork for the establishment of a medical unit for its insurance activity: three medical consultants were hired in pursuit of this goal and charged with putting together the medical office. Two of them were sent to Paris, to the offices of New York Life, to study and learn from their medical service. The same year, the renowned scientist Ettore Marchiafava was tasked with leading the medical office. He is also the one credited with putting together the “Guidelines for Specialist Physicians”; these physicians worked for INA at the various general offices and carried out check-ups on policyholders as well as preliminary risk assessment check-ups for those wishing to take out a life insurance policy.

After a few corporate reorganisations, which included the resignation of Ettore Marchiafava and the brief tenure of Vittorio Ascoli, in 1925 the INA’s medical unit took on a clearly defined form and took on the title of “Healthcare Service” (Office VI): In 1928, the service began to participate in national and international conferences, and in 1930, they started a medical support program for policyholders, to “test” their health; the following year, annual exams were introduced to recruit medical directors. In 1935, the first regional medical centre was set up in Turin, followed by others in every regional capital of Italy. Then, from 1939 onwards, smaller local medical centres followed: some of the tasks of these health and preventive medicine consultants, who had access to modern lab equipment, were exclusively insurance-related (risk-assessment), and others were “free and thorough bi-annual check-ups” that INA offered to its policyholders. 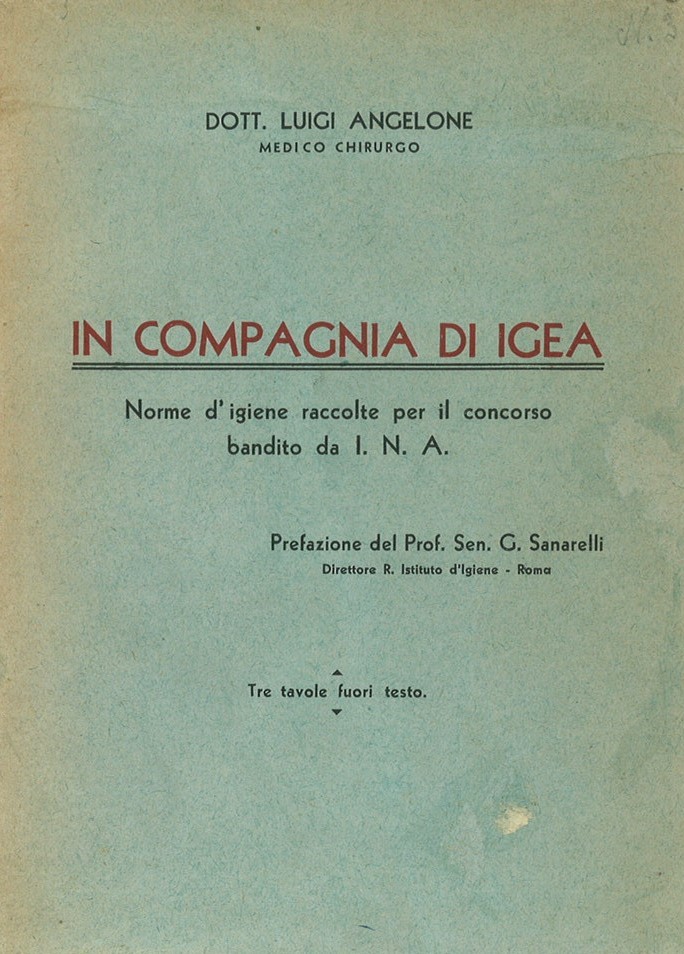 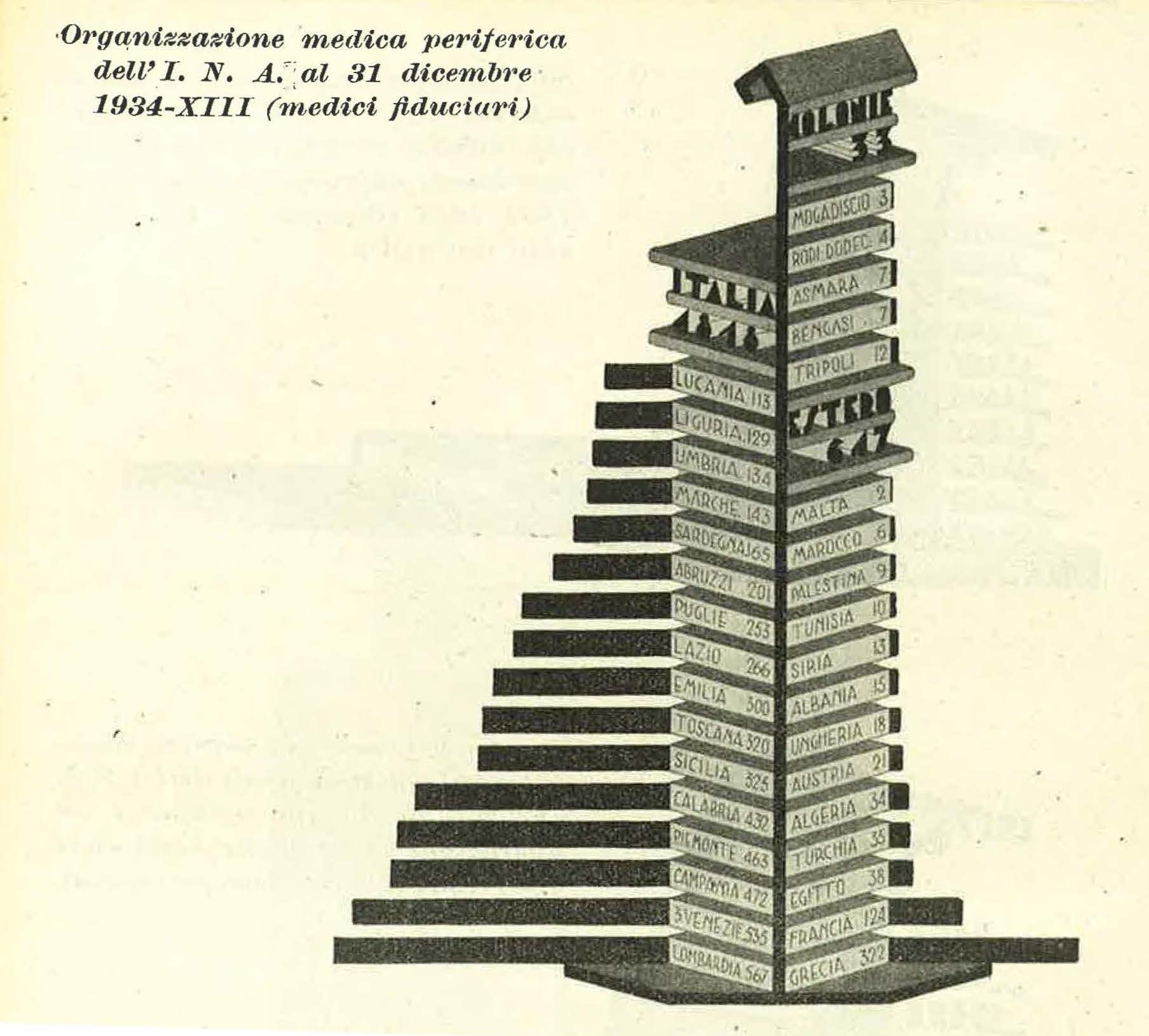 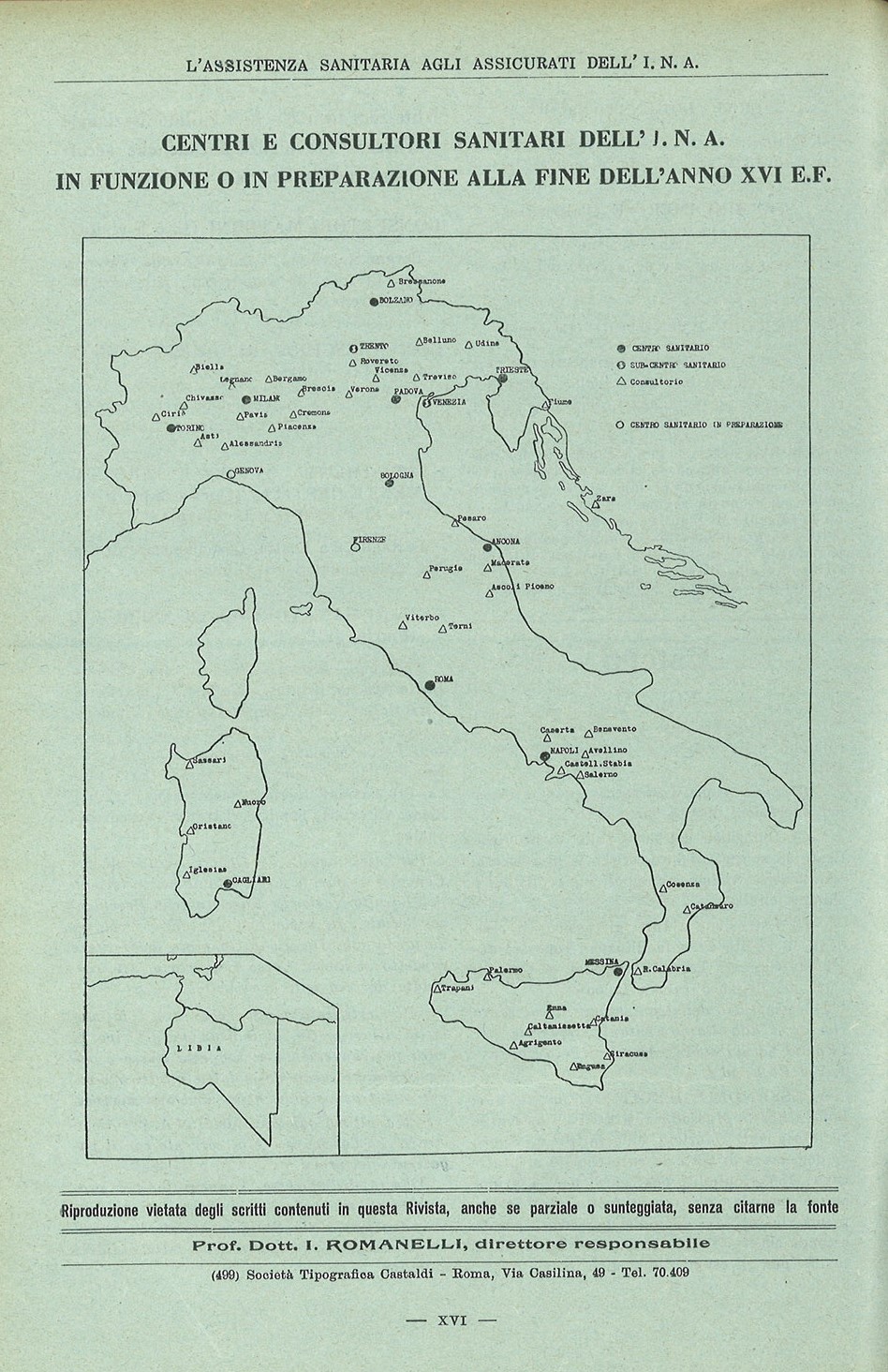 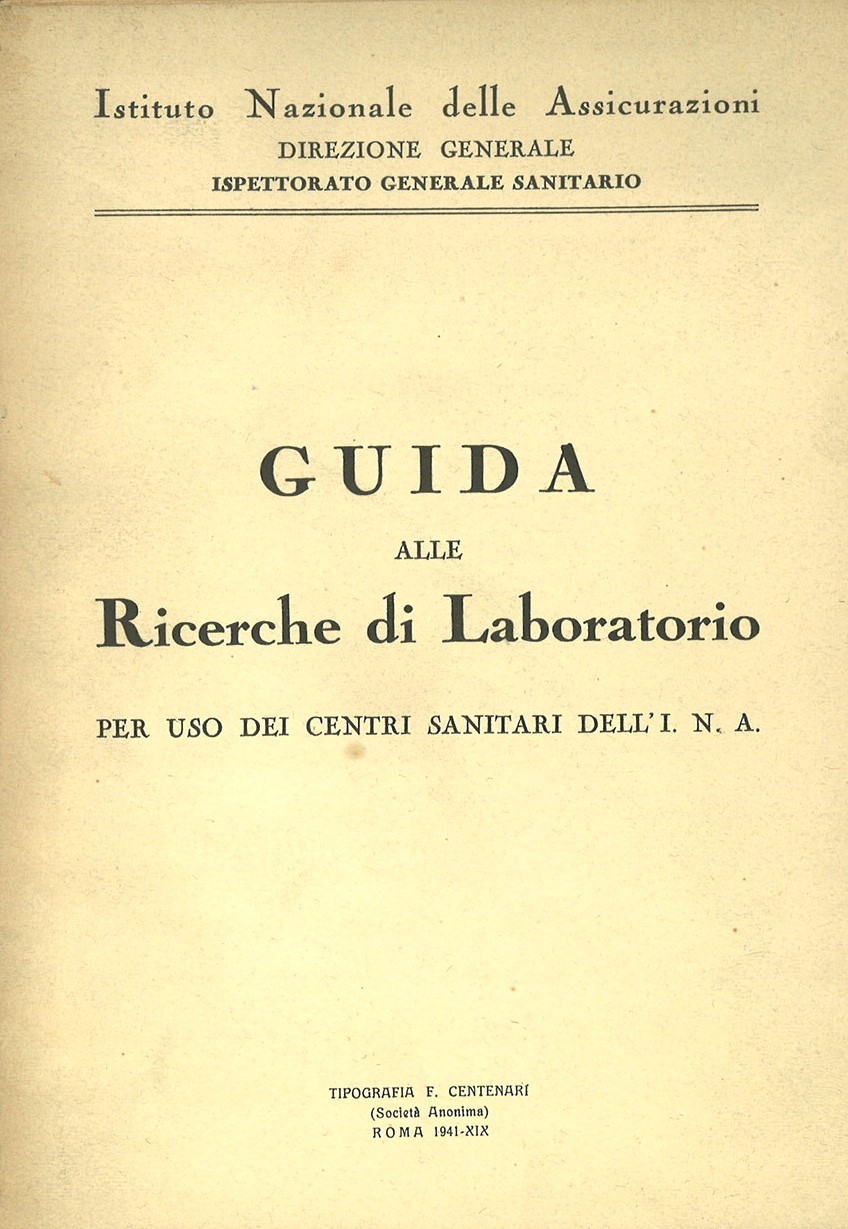 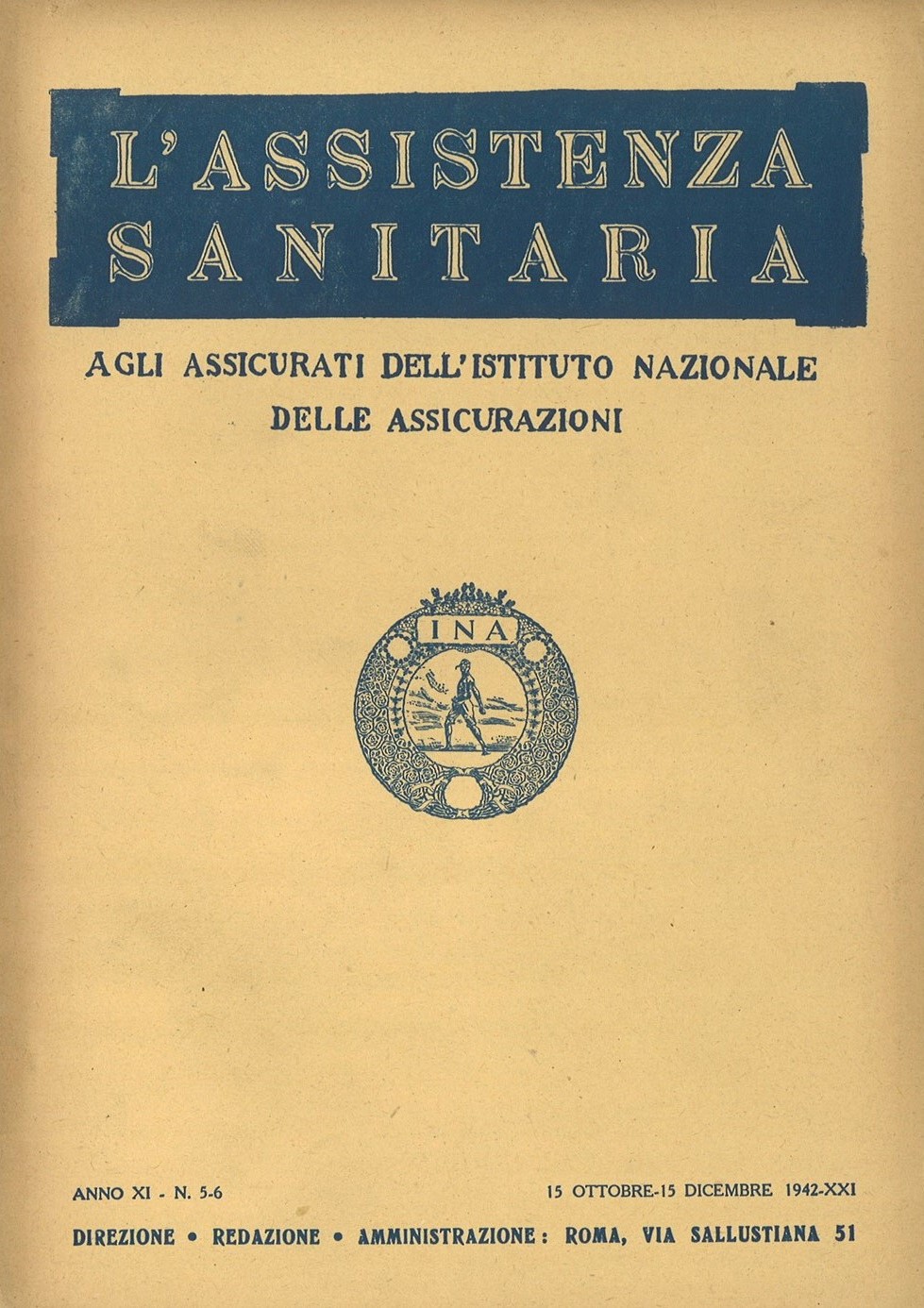 In addition to these practical interventions, the medical service also assisted the INA’s general headquarters in disseminating information regarding preventive medicine through the publication of the magazine “L’Assistenza sanitaria”, published from 1932 to 1943 under the watchful eye of its founder, the head of the medical service, Ilario Romanelli (who would be replaced by Pietro Trottarelli in 1943). The bi-monthly magazine included articles and statistics regarding life insurance compiled by medical directors as well as INA physicians, research and scientific doctors in Italy and abroad, and medical services of other insurance companies, both in Italy, such as Assicurazioni Generali, as well as in Europe, such as Münchener Rückversicherungs-Gesellschaft and Prudential. In addition, and in the wake of relevant announcements, the INA published a series of excellent monographs on preventive medicine that were designed to spread the new guidelines across all levels of society, guidelines that were intended to extend people’s lives and keep them healthier for longer: “In compagnia di Igea”, “Viver sani”, “Salute, Tesoro della vita”, “Sotto il platano di Coo”, “Cuore sano e cuore infermo” and “Igiene della vita coloniale”[1]. These publications are all of significant interest: “L’Assistenza sanitaria” magazine for its potential contribution to the research of scientific language (from devices to physiology), to the history of the relationship between medicine and life insurance in Italy, the colonies and foreign countries where the INA was active (primarily Greece and Hungary, but also France and Egypt) and finally, analysis of debates from the Fascist period on topics such as racial orthogenesis. The magazine is also notable for its varied writing styles, intended to ensure it reached every level of society: articles in rigorous scientific language alternated with essays full of literary digressions and citations (Lucretius, Virgil, Horace, Saint Francis, Leonardo da Vinci, Leopardi, Carducci and many others). The monographs, on the other hand, are of interest for anyone researching the elements of Italian society at which they were targeted: some were designed for standard life insurance policyholders, while others were for those insured under popular policies, and others still created exclusively for the new colonial lifestyle. In its own way, each of them provides a valuable insight into Italian society in the 1930s. [1] * “Together with IGEA”, “Healthy Living”, “Health, the Jewel of Life”, “Under the Tree of Hippocrates”, “Healthy Heart and Unhealthy Heart” and “Hygiene in Colonial Life”.