Knowledge as Enhancement: Beauty, Utility, Delight – And Above All, Security 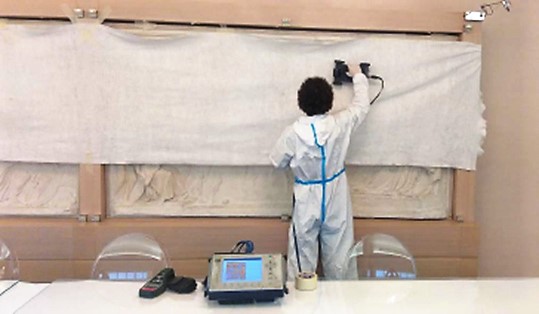 As Treviso exhibition draws to a close, Canova’s plaster bas-reliefs return to Trieste

A highly specialised team, led by a structural engineer accredited by the Ministry of Culture and the Central Institute for Restoration, has visited Trieste to perform an in-depth analysis of Generali’s two plaster bas-reliefs by Antonio Canova: “The Death of Priam” (1787-90) and “The Dance of the Sons of Alcinous” (1790-92). Their investigations provided information on the Treviso master’s techniques, enabling the two works to be lent to the Bailo Museum in Treviso for display in the Canova, Glory of Treviso, from Classical Beauty to Romantic Dawn exhibition, taking place from 14 May to 25 September 2022.

The engineer performed electromagnetic investigations using tip pacometers and pacometric scanners in conjunction with latest generation high-resolution radar and made high-frequency (ultrasonic) micro-seismic measurements to estimate the extent of any lesions and thus gauge the homogeneity of the plaster.

Endoscopic inspections of the rear of the panels made it possible to assess the suitability of the frames.

Professor Pavanello, a leading Canova expert and co-curator, with Fabrizio Malachin and Nico Stringa, of the Treviso exhibition, commended the in-depth investigations commissioned by the Generali Corporate Heritage for helping scholars to better understand how the works were constructed and for assisting determination of the most appropriate actions for conserving and transporting them.

Knowledge is useful not only in conservation and evaluation but also in technical areas such as transport and insurance, enabling even fragile works to be exhibited in complete security and beautiful art to be presented to an ever wider audience.

Approximately 50,000 visitors came to see the exhibition, and such was its public success that it was extended until November 1, the Trevisano master’s birthday. Among the events that took place around the exhibition were school visits, special opening days, a photo contest for the best images of the works on display, and numerous lectures on Canova.

After the exhibition closed, the bas-reliefs were returned to their resting place in Trieste’s stunning Palazzo Stratti. Weighing in at 600kg, due care had to be taken as they were lifted using a powerful crane, which restored them to their previous splendid frame. All of this was only possible because a good insurer is constantly meticulously evaluating risks, and because Generali treats its artistic heritage with the same care and responsibility as it does with people. The same way it has done for almost two centuries. All in the service of building a safer future.