1960s – Safe Travel in the Great Boom of the Sixties 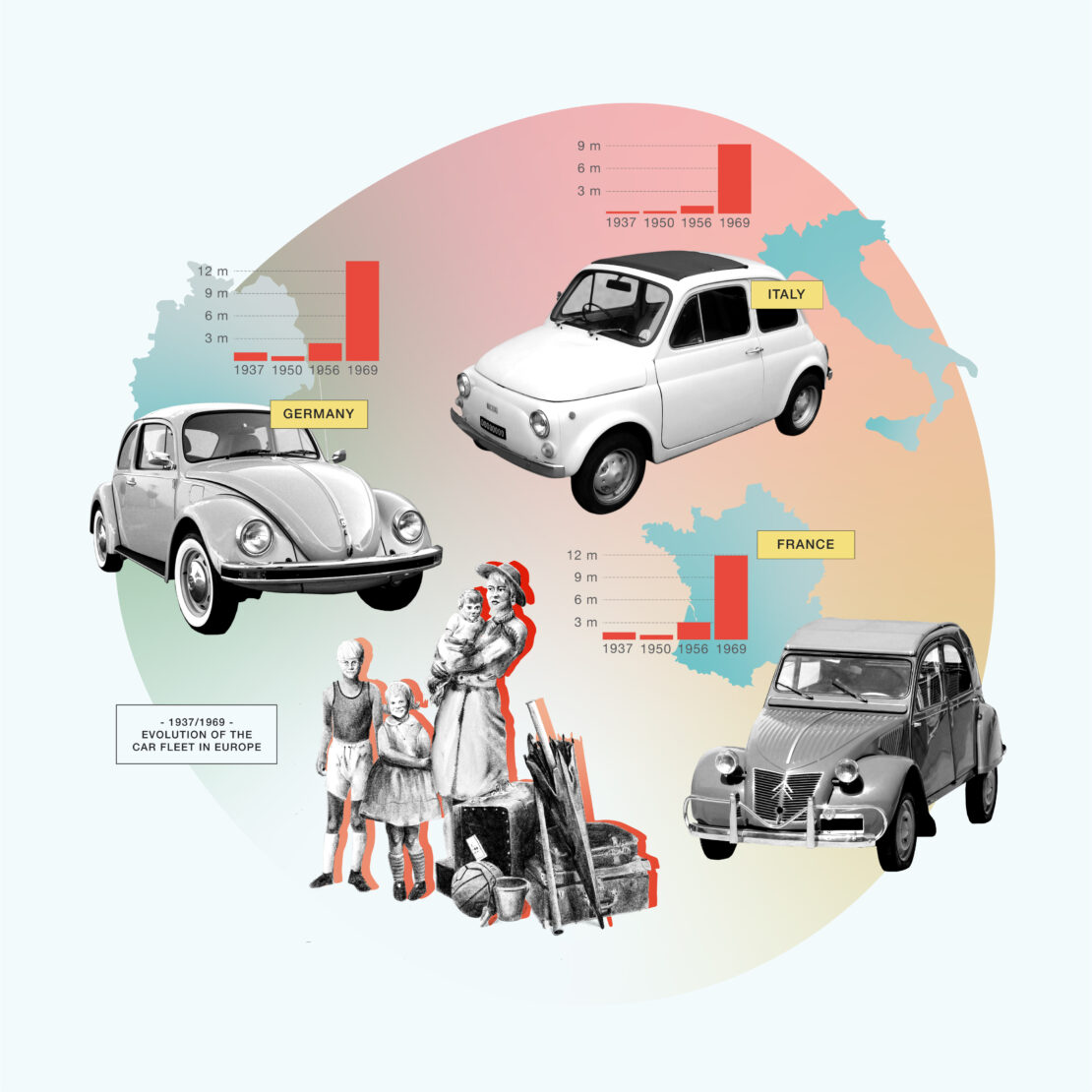 Towards the end of the nineteenth century, a spectre roamed the roads of Europe. The thunderous and concrete spectre of the automobile. The word was on everyone’s lips, and caused various disputes. The great minds of the Académie Française decreed that “automobile” had to be a masculine noun, although the linguists didn’t agree. In Italy, after a masculine start and years of fierce debates, it was Gabriele D’Annunzio who wrote: “The automobile is feminine” having “the grace, slenderness, vivacity” of a woman. It was 1926. From that year on, in Italy, the latest technological innovation was female.

Beyond the linguistic controversy, the car posed various problems of administrative and social natures, due to the accidents occurring for three reasons: firstly, the increased number of vehicles in circulation; then, the insufficiency of the road network; finally, the inexistence of a real highway code. The European states committed themselves to solving these problems. At the turn of the century, they devised a system to give each vehicle an identification, or registration plate. Italy began using registration plates in 1898. In 1927, it established the Public Automobile Register or “P.R.A.”. In 1933, the Italian state established an initial organic traffic code, which summarised and integrated the set of previous laws and regulations, some still dating back to the nineteenth century. This initial code was renewed for the first time in 1959 and again in 1992. The expertise of insurance companies, above all Generali, was also used to help with these issues.

Car insurance was a challenge that the company was eager to take on. An early sign of the spreading of the vehicle in Italy appeared in an article of the 1895 Generali Bulletin, on the occasion of the international bicycle and automobile exhibition in Turin. At the beginning of the following century, the company invited its subsidiaries to give space to car insurance, became interested in covering vehicles against fire damage, and distinguished the categories and uses of vehicles – petrol, alcohol or electric cars, cars for private use, for the transport of people or goods – with a view to defining the premiums. Since the primary objective was to insure against personal injury, the sector passed to the company’s dedicated subsidiary, Anonima Infortuni, founded in 1896. Generali extended insurance in the automotive sector to all the countries in which it operated, in Europe and around the world. However, it was in the late 1950s that the decisive turning point took place. The indication of an “Automobile Branch” and an “R.C. Auto”, or car insurance, item appeared for the first time in the company’s records.

That item rang out in all the ministerial corridors in those years. Motorists, it was said, had to take legal responsibility for any damage caused to people or things while they were driving, and to take out a policy with an authorised insurance company. The companies of the time, Generali in the lead, worked with the state to define the regulatory outlines of the issue. The law, which came into force in 1971, provided for compensation for victims and the creation of a guarantee fund for the compensation of damages from unknown vehicles, uninsured vehicles, or vehicles insured by insolvent companies. The benefit was so evident that the president of the Senate, as well as of Generali, Cesare Merzagora, defined car insurance an “indispensable social necessity”.

In that climate of expectation, Generali adapted its structures to support the inevitable increase in workload resulting from compulsory insurance coverage. It improved recruitment services, with the adoption of simple and immediate contractual tools, and settlement services, accelerating the definition of damages with faster and more adequate procedures. Guaranteeing a service based on efficiency and cost-effectiveness, and on the recognition of the loyalty and generosity of the policyholders, constituted a concrete advantage for gaining the trust of new customers and maintaining the trust of those who were already insured. In short, car insurance proved to be an excellent business card for the company.

Generali was rewarded with a significant result after difficult years, marked by the dizzying increase in claims. In the five-year period from 1901-1905, accidents involving cars and motorbikes for non-professional causes amounted to 209, while there were 2,437 bicycle accidents, and 427 accidents involving “other means of transport”. When the car became a mass commodity, the incidence of claims began to weigh on the branch’s results. The difficulty featured constantly in records and budgets. For example, at the end of 1949, 675 million lire were paid for car damage alone, 86% of the total of the accidents branch. In the 1960s, until the motor vehicle civil liability law entered into force, Generali maintained a prudent attitude in the sector. However, the growing popularity of the car created sensational responses. In Italian insurance in general, premiums from the auto sector in 1938 represented 10% of the total, while in 1959 it exceeded 35%; in 1962, Generali held 10-11% of the premiums collected across the Italian market, a year in which there were over 3.5 million vehicles. The introduction of the law led to a 32% jump in contracts, and, according to ANIA estimates for 1971, the premiums collected that year amounted to 645 billion lire (almost 50% of the sum of the various branches), placing Italy in seventh place worldwide in the insurance field.

The increase in premiums, however, was only the mirror of social progress well beyond national borders. The entry into force of motor vehicle civil liability insurance, in 1971, in fact, activated in Italy, too, the agreement established in Strasbourg in April 1959 between the various European countries on the subject of motor vehicles. Generali had fought for this solution, aware of the benefit it would bring, particularly for guaranteeing compensation for victims of road accidents. The choice by the state to assign such an important public service to free insurance, and not to monopolistic activities, was hailed as a significant recognition of the social function performed and the technical efficiency achieved by the company.

Once the law was passed, there were opportunities for further expansions of the market to motorcycles and motorboats, and suitable services were arranged. Generali’s commitment and perseverance had an impact on the society of the time, and drivers’ sense of responsibility improved as a result. In 1974, the company participated in the initiative, promoted by the Automobile Club of Italy, that aimed to introduce the “European Accident Statement”, which had already proved its worth in other European countries, Italy included.