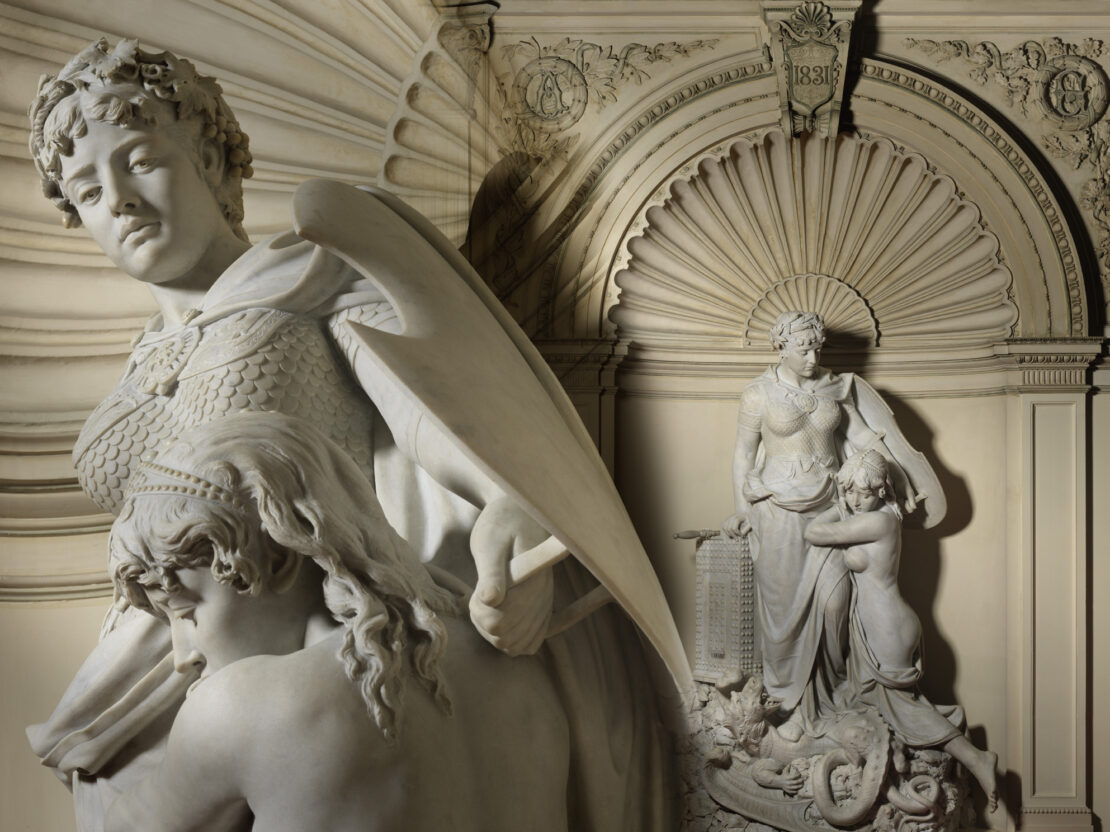 “Mr S.[ecretary] G.[eneral] (Giuseppe Besso, ed.) informs that the sculptor Rendić is the author of the sketch of a group for the staircase of the new headquarters [Palazzo Geiringer, ed.]. A clean and concise style, with little worthy of mention as regards the aesthetic character, as befits a business environment, and above all a few short months before the inauguration of the first headquarters of Generali, with no time for fine details: the end result and the economic effort are the sole priorities. The subject of the expense was raised during the Management’s meeting on May 31st, 1886 – “7000, 6000 f[lorins]” for a group made from two blocks, “the base and the statue”, or “4000 f[lorins] for a group carved from Medulin stone instead of marble”. The idea of carving it out of marble carried the day, to mitigate the sculptor’s claim (an expertise performed recently suggests that it is indeed a single block of rough marble). At this point Besso intervenes, seemingly to defend the work and its creator, informing those present that the project had received praise from a respected Viennese expert, the “famous Professor Meyer”, who he adjudged to be “of excellent taste and worthy of praise”.

Around two weeks later, the architect charged with the construction of the Generali headquarters in Trieste, Eugenio Geiringer, was summoned by the Management to report back on the progress of the work. Geiringer provided the sculptor’s justification of his honorary and conveyed his willingness to complete the task for a lower price.

This is the only information contained within the Historical Archive regarding this commission of the sculptor from Split, Ivan Rendić. Nothing more is said regarding the choice of artist, the materials or the subject matter.

The choice of sculptor may have been motivated by the fact that Rendić was a relatively well-known name in Trieste and the Dalmatian coast at the time, having completed various public and private monuments in the area. In fact, his fame was such that he was commissioned by a committee of Triestine citizens to create a celebratory sculpture to be placed in the piazza in front of the railway station to commemorate 500 years since the capital of the Venezia Giulia region had voluntarily submitted to Austrian rule.

A warrior woman stands over a dragon, shield held up in defence of a young girl, with her right hand resting on a safe. On the safe lies a sword, ready for action. An imposing expression on her face – protective yet peaceful – gives her an almost maternal appearance. This maternal instinct, with its sense of tender protection, serves as a metaphor for the business of insurance. The sculpture is an allegory of insurance or of welfare, or put simply – an allegory of Generali.

The sculpture is a reassuring presence that dates back to at least 1888 (the oldest remaining photos are from late 1886-1887), and is a striking exhibit in the present-day assembly hall (which until 1966 was the grand staircase). Also in 1888, Geiringer published an essay in Vienna entitled Das neue Administrations-Gebäude der “Assicurazioni Generali”. In it, he describes the piece as “an allegorical sculpture carved from Carrara marble”.

A metaphor for the company and/or insurance, the sculpture enjoyed almost immediate artistic acclaim: it could stake a reasonable claim to being the company’s first use of visual communication, appearing on the oldest calendars in the collection, on rates booklets and advertising pamphlets and on some of Generali’s insurance document holders. The piece is framed with an elegant rinceau decoration, with the old lighthouse of Trieste, the lanterna, in the background. The impressive official photo album contains an homage to Giuseppe Besso, the man who may have been behind the project and after whom the album is named. Artistic fortune continued to smile on the sculpture all the way until the modern billboard advertisings by Pollione Sigon, which is one of the last times it appeared before making way for more contemporary female representations, as well as an artistic style more in keeping with the demands of a changing market. 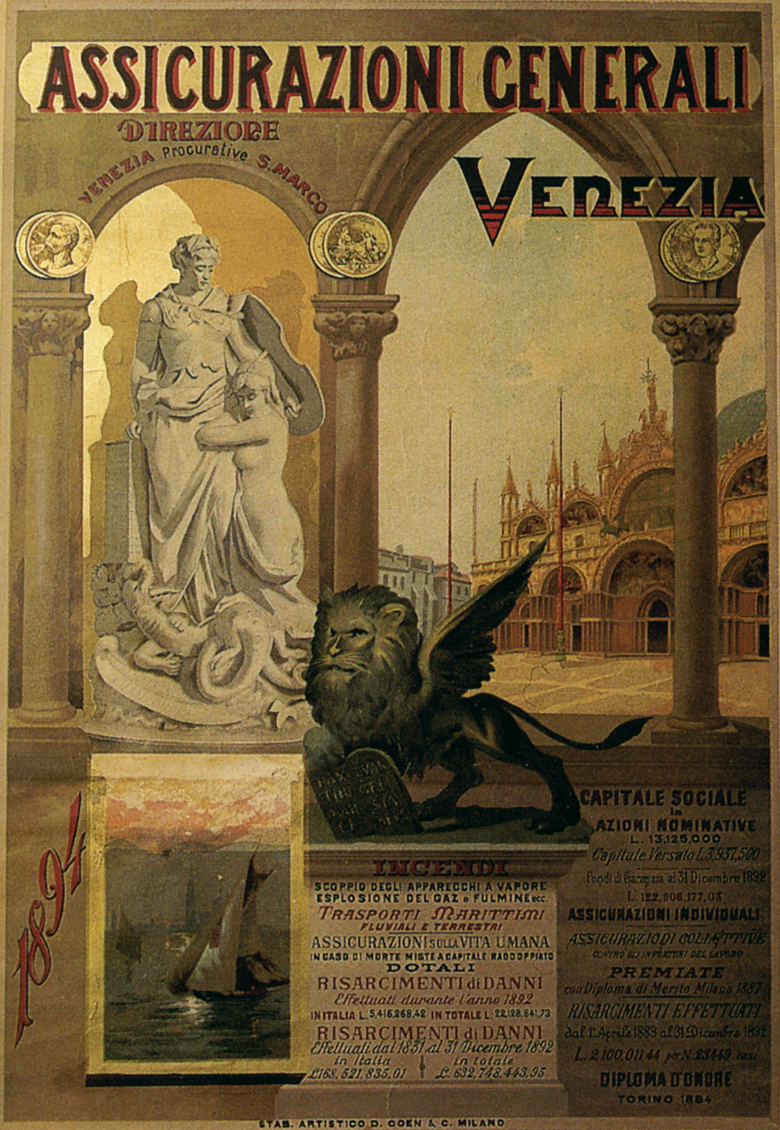 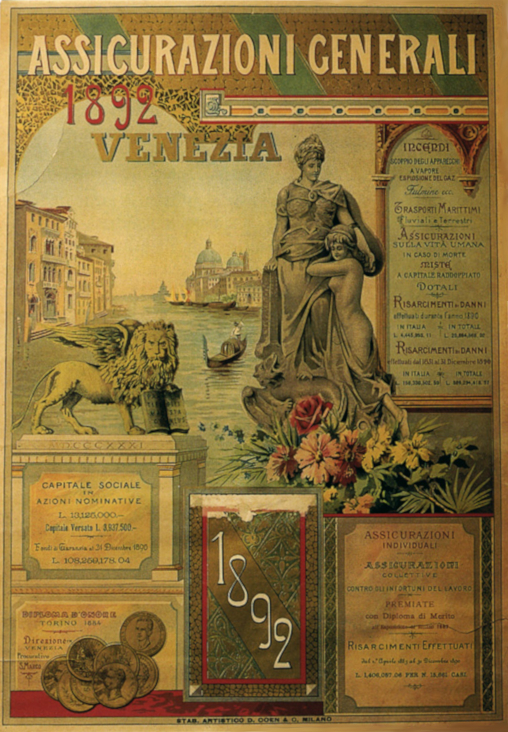 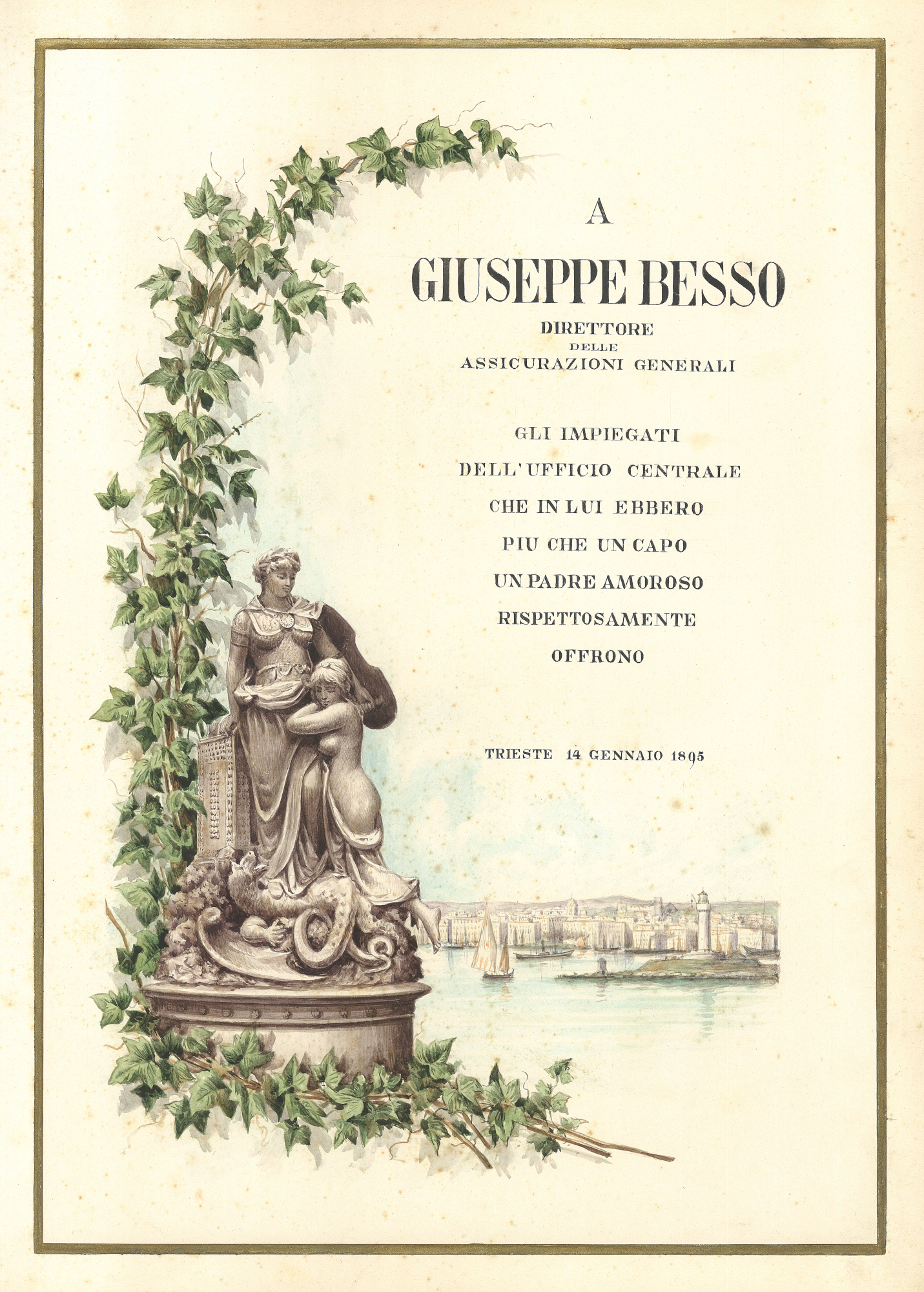 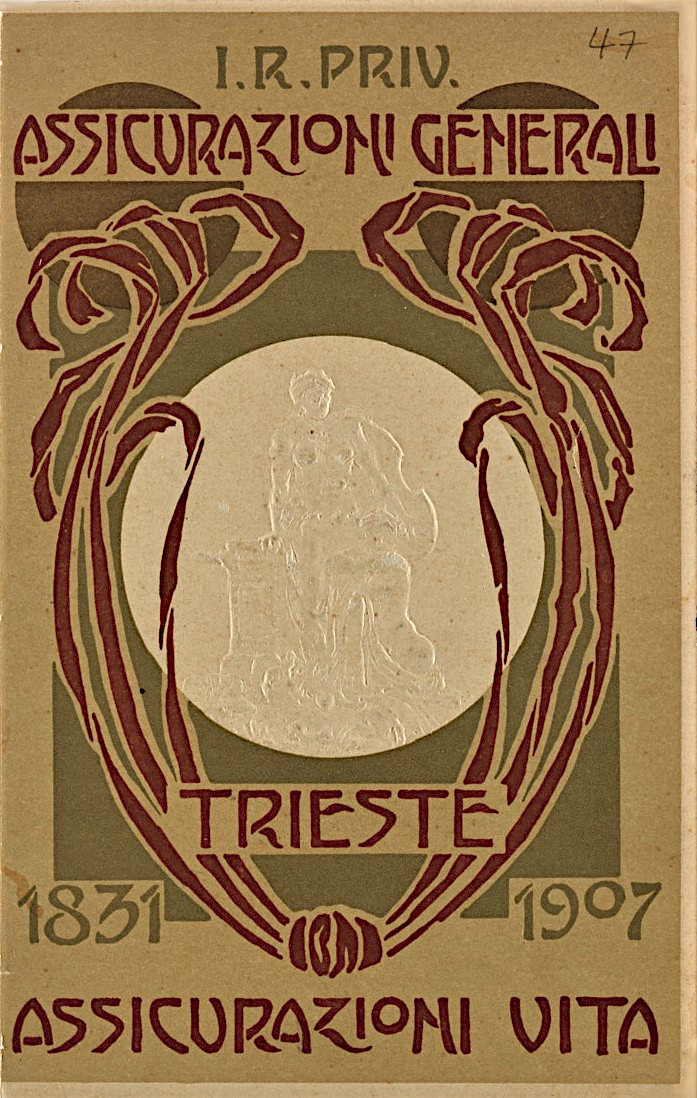 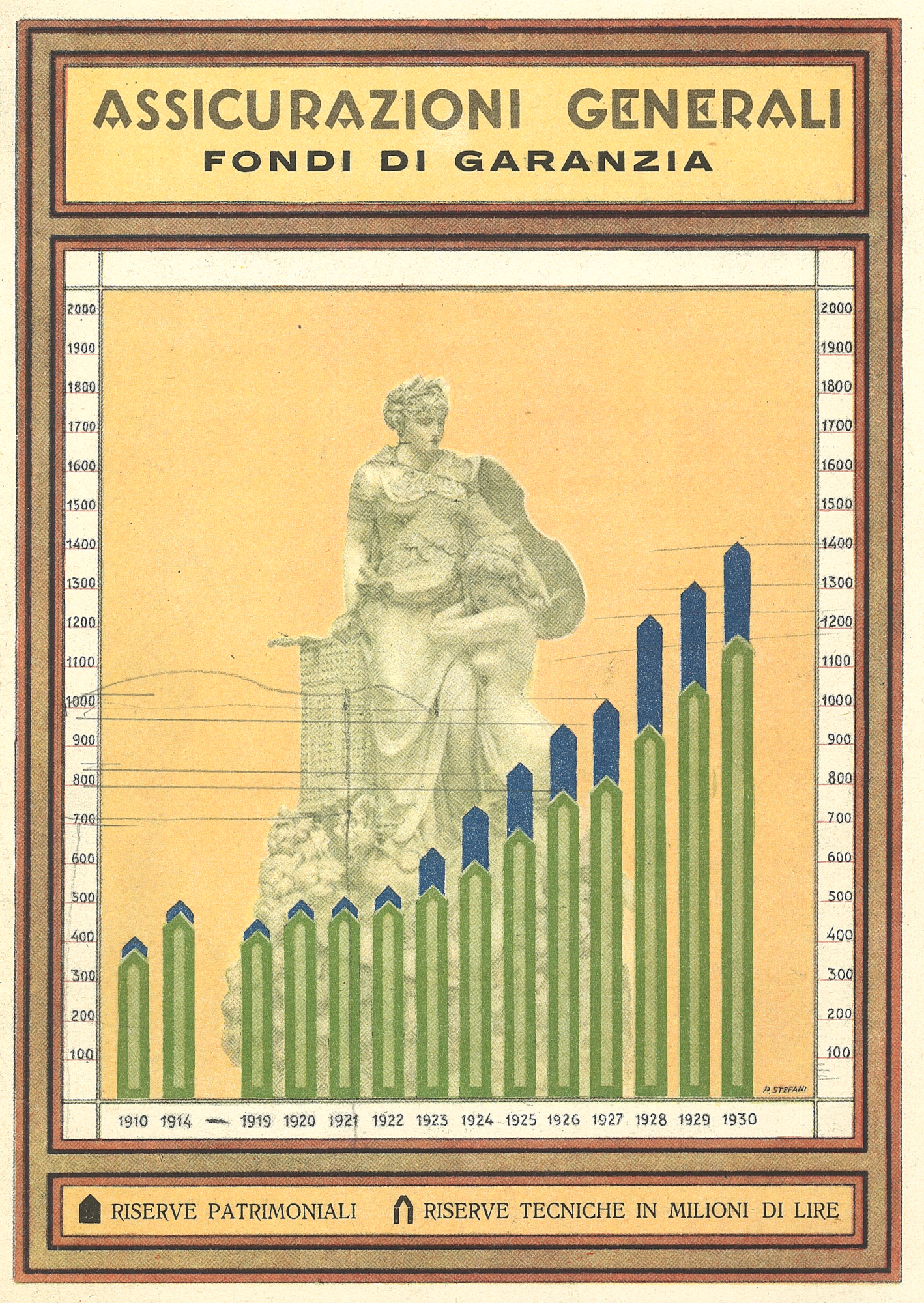 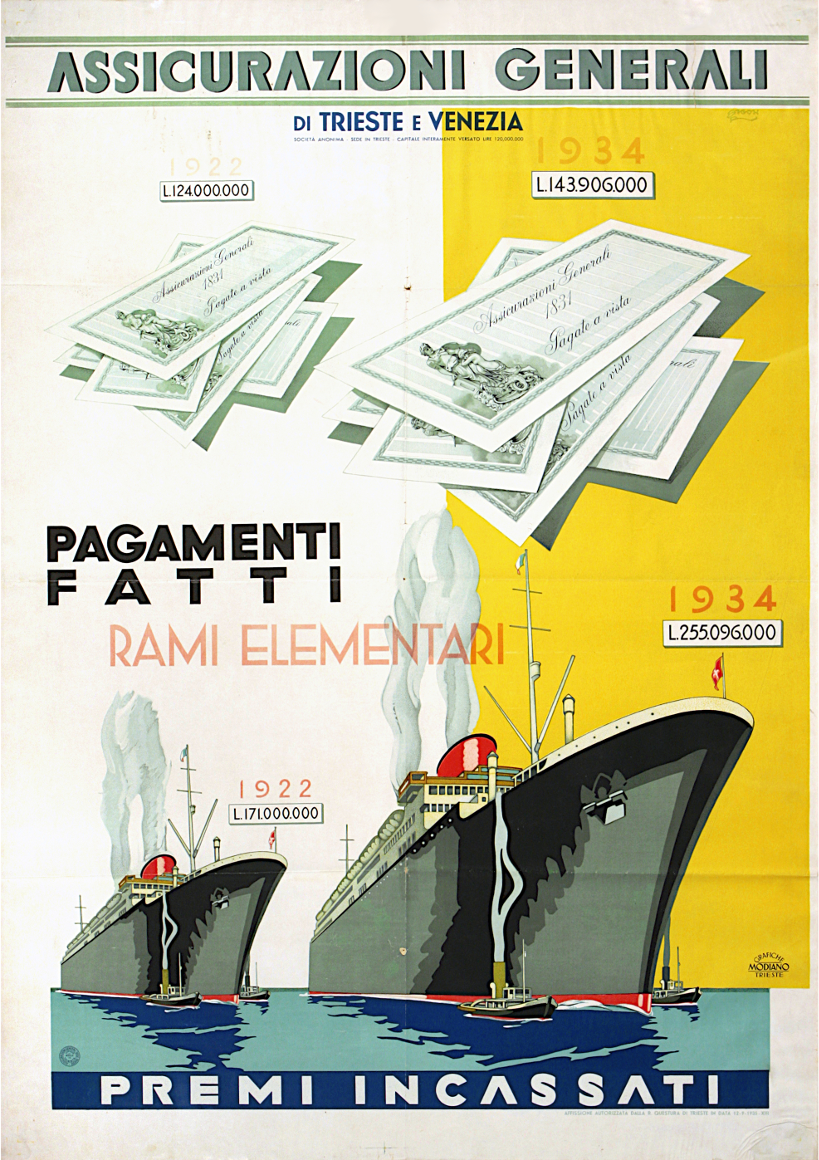 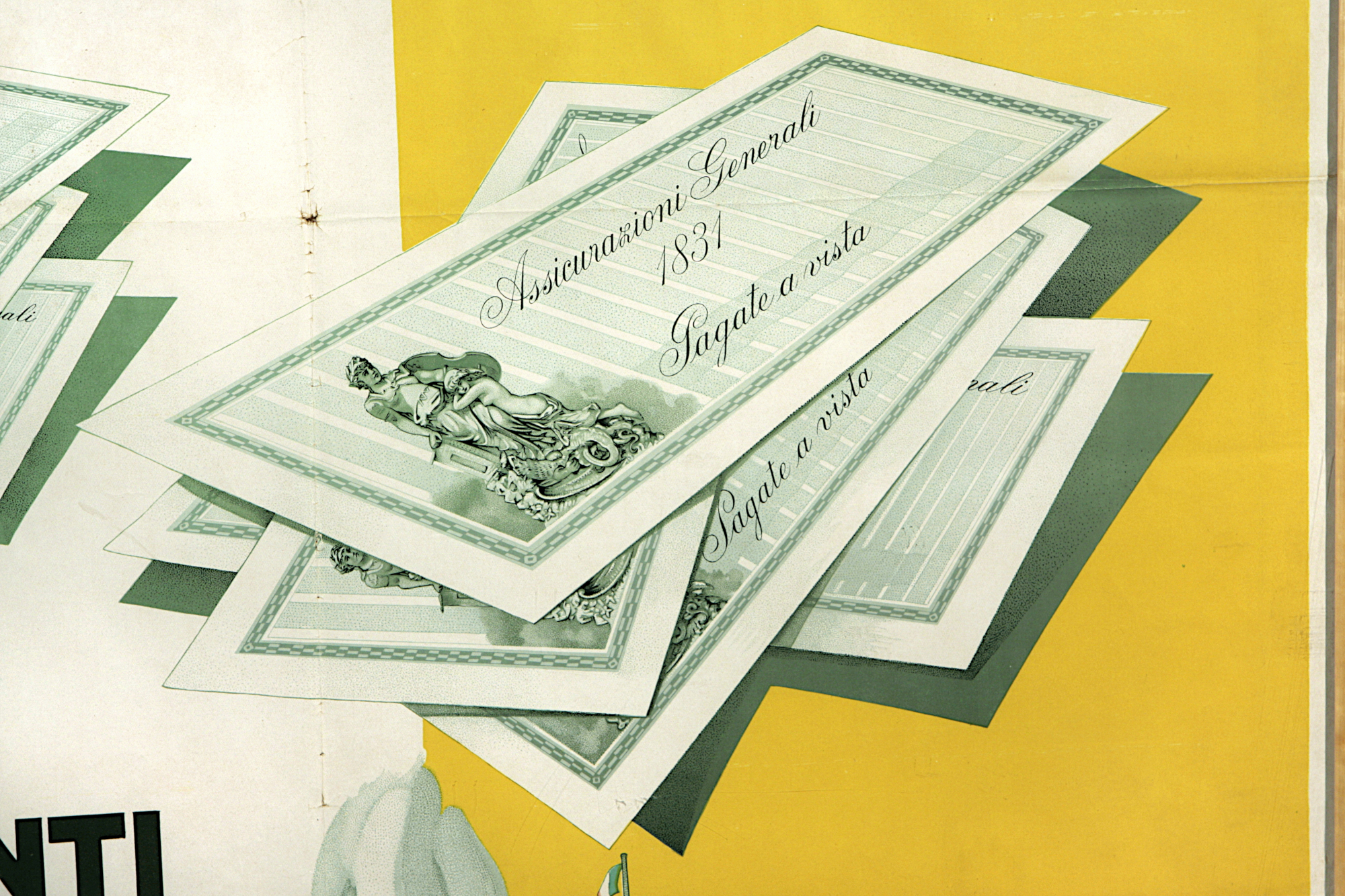