Gems from the Library’s Antique Collection: the 18th century treatise on maritime insurance by Ascanio Baldasseroni. 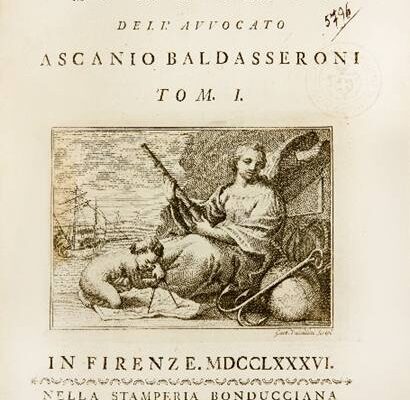 This is a 1786 edition, which forms part of the Antique Collection of the Assicurazioni Generali Library. It is a first edition of Ascanio Baldasseroni’s work, Trattato delle assicurazioni marittime (“Treatise on maritime insurance”). A second edition was published in 1801, after the first proved a great success among his contemporaries.

The author examines insurance contracts in various European countries and makes reference to their legal aspects and principles. This work, published in three separate tomes by the Bonducciana publishing house in Florence, includes appendices which contain the legal documents regarding maritime insurance in use at the time in the countries he covers.

Ascanio Baldasseroni was born in Livorno in 1751. He graduated with a degree in Law from the University of Siena, and in 1778 he opened an office which went on to become one of the most renowned in the city. In 1799 he was appointed as the legal counsel of the French General Consulate in Livorno, and a year later, in October 1800, he was appointed as part of the provisional government of Tuscany established at the time. A member of Livorno’s court of first instance, in 1813 Baldasseroni was appointed director of the state property office’s Mediterranean department, and in 1814 he became a judge in the civil and criminal tribunals of the Regia Ruota (“Royal Courthouse”) of Pisa. He died in Florence in 1824.