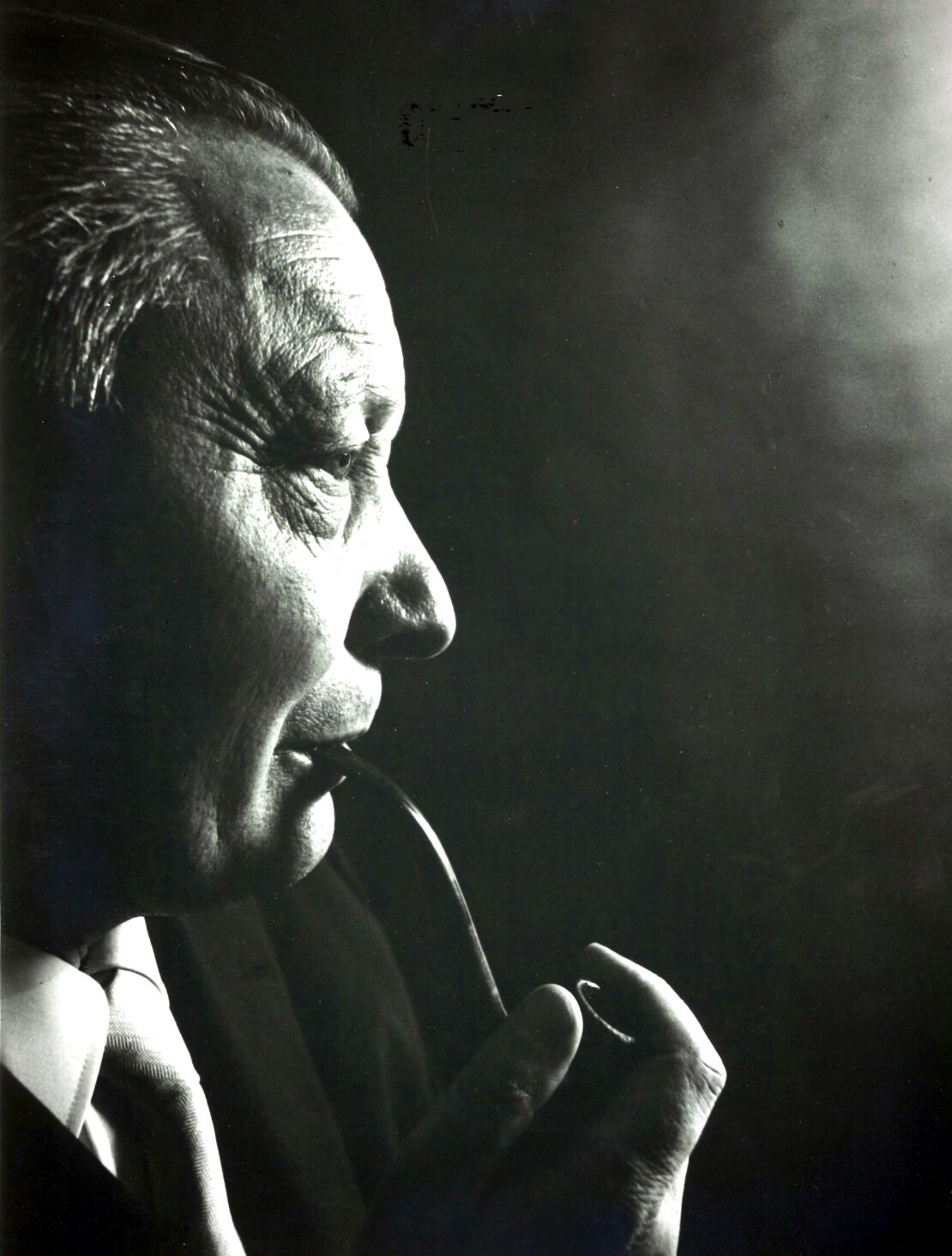 Antonio Marussi (1908-1984), born in Trieste, was a world-famous scientist. He is considered one of the leading geophysicists of the 20th century and the father of modern three-dimensional geodesy.

His curriculum vitae, preserved in his personnel file in the Generali Historical Archive, shows that he graduated with a degree in mathematics from the University of Bologna in 1930 and then went on to pursue a research career, first at the Geophysical Institute of Trieste as a seismologist and later at the Military Geographic Institute of Florence as a geographic engineer.

After further studies in statistics and actuarial mathematics, in 1934 he was hired by Generali as a mathematician at the actuarial office of its life insurance branch. Here, he met another great scientist, Bruno de Finetti, with whom he shared interests, research and personal ties (he married de Finetti’s sister, Dolores).

In his resignation letter to then-president of the company, Edgardo Morpurgo, in 1937, he wrote that he had decided to leave in order to return to the Military Geographic Institute of Florence (which was committed to him for his scientific achievements). He nonetheless retained a positive relationship with Generali and his former colleagues, as seen in the letters he wrote to them that were recently donated to the archive by his niece, Fulvia de Finetti, along with other family documents. Filled with irony, they tell the story of his work in the Aeolian Islands. 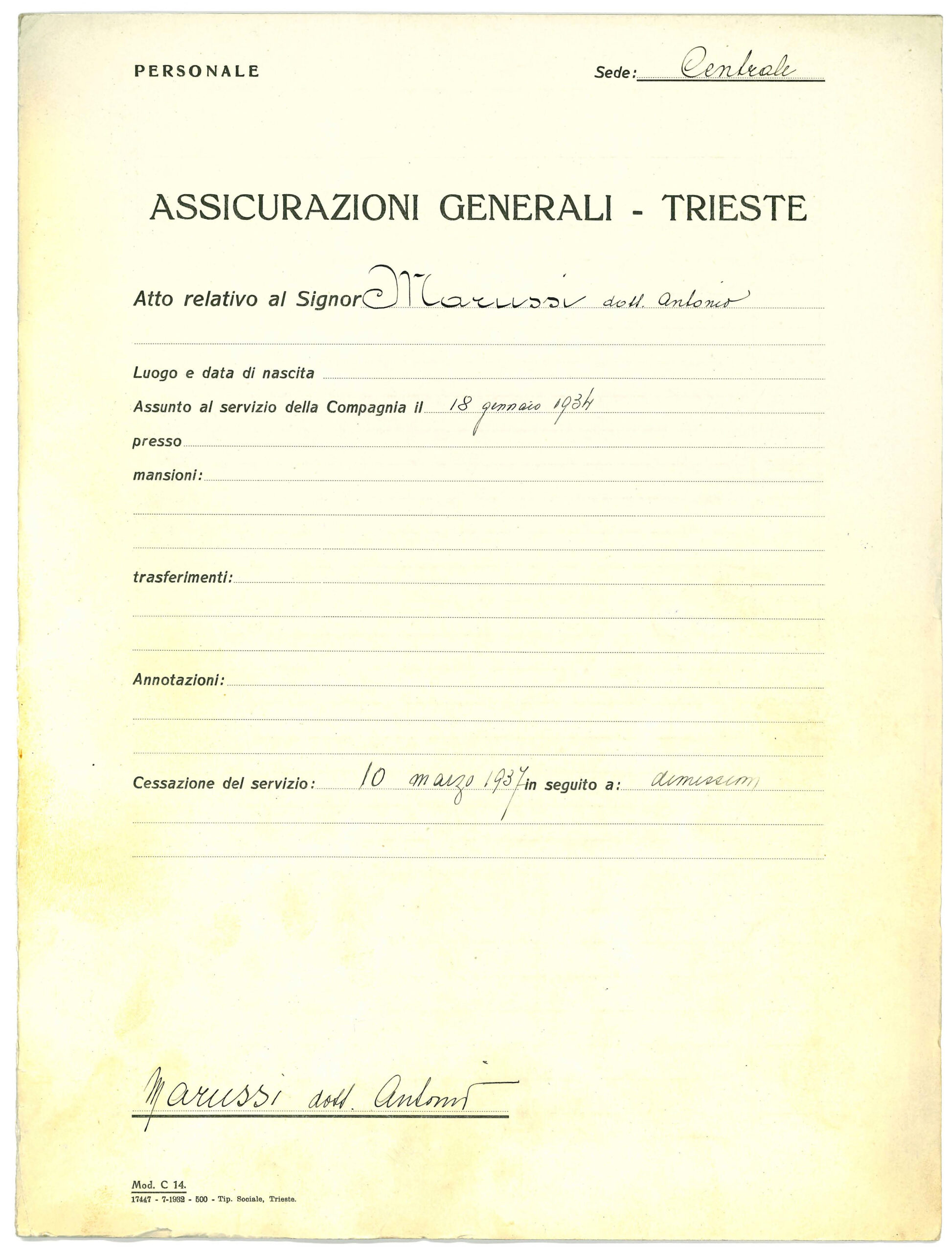 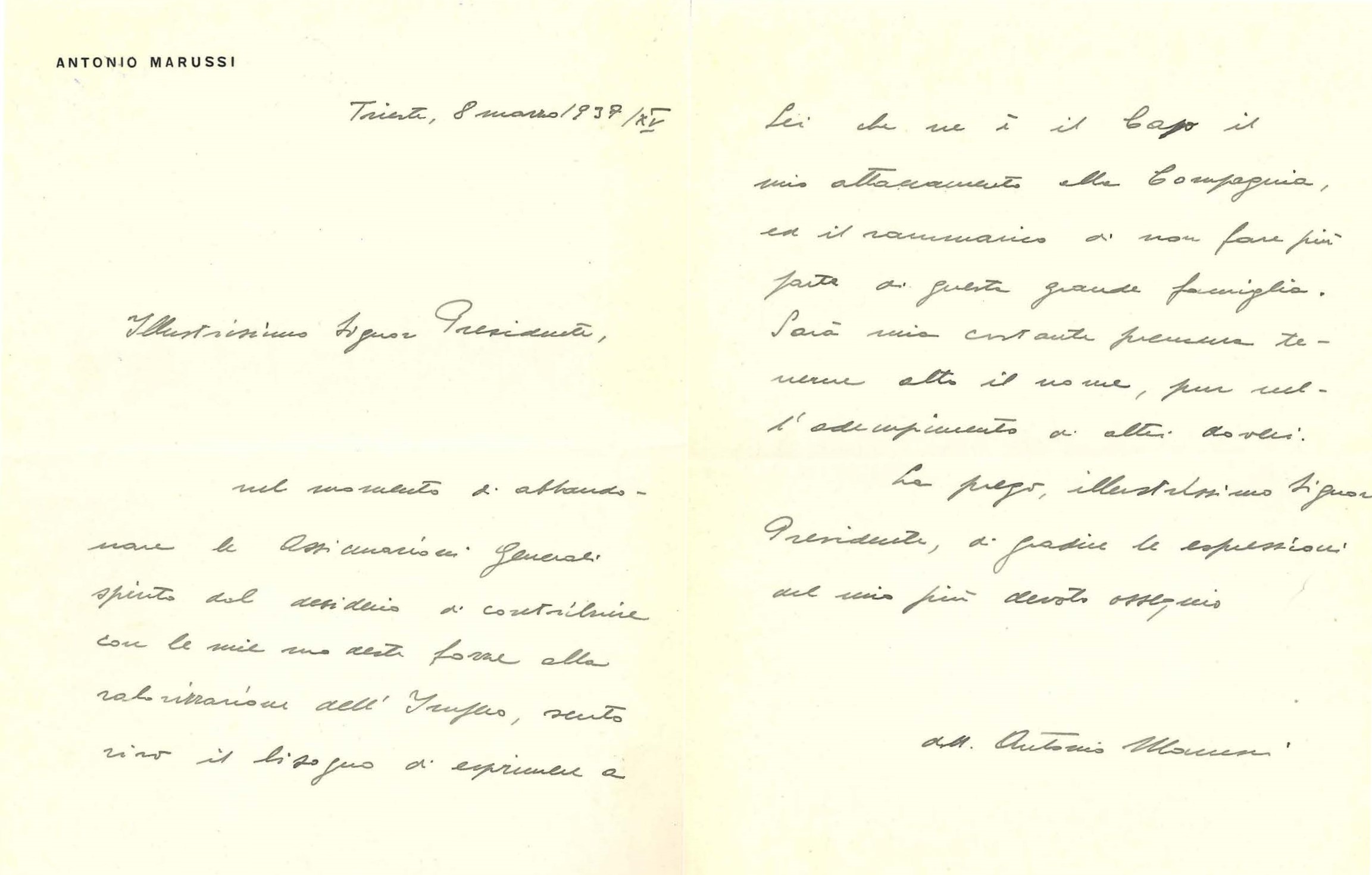 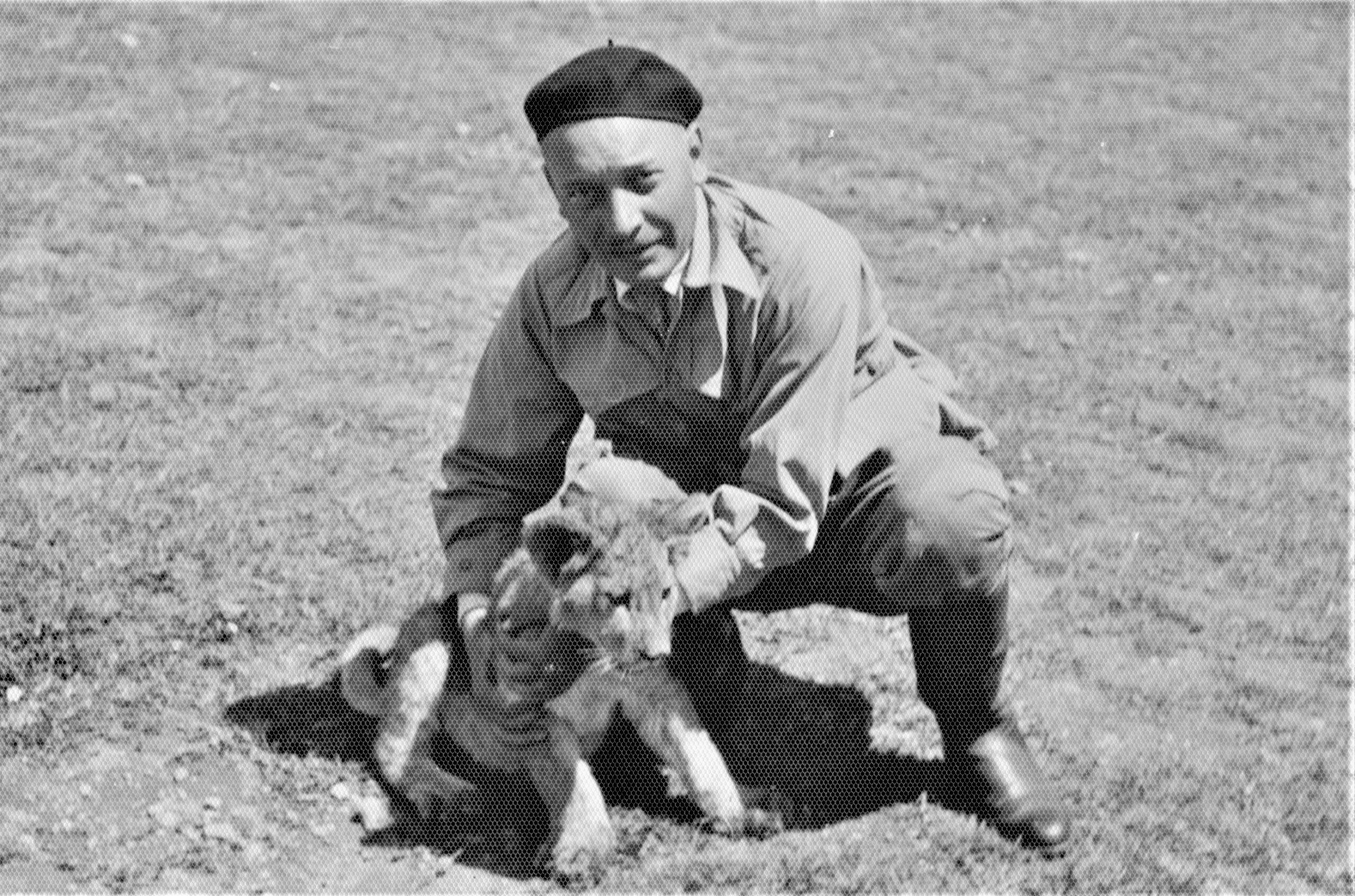 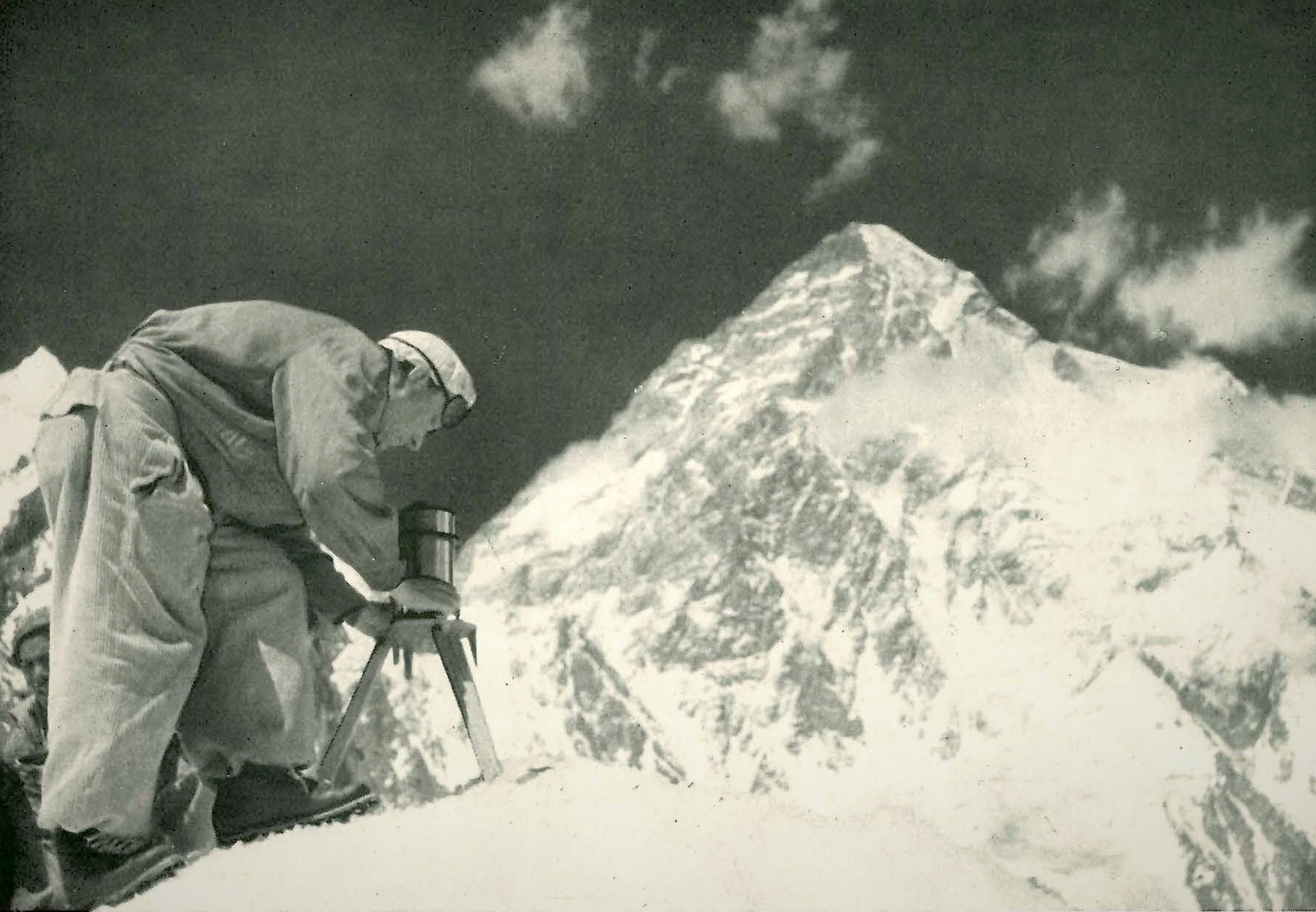 In 1952, he was appointed a full professor of geodesy at the University of Trieste, where he founded the Institute of Geodesy and Geophysics, a global leader in its field. In 1962, he received an award from the Italian Ministry of Public Education in recognition of his scientific and educational endeavour. His personnel file attests that Antonio Marussi spoke several languages to a high level, including English, French and German, and a fascinating homage by his friends at the Eugenio Boegan Caves Commission testifies to his many interests, ranging from literature to philosophy, ethnology to music and figurative art (he was the grandson of the painter Piero Marussig). His friendship with the Triestine speleologist Boegan and his passion for speleology led him to take an interest in the Grotta Gigante in the Karst region of Trieste. He used this area as a scientific laboratory to carry out measurements of oscillations and shifts in the Earth’s crust in the Karst, by installing two pendulums of his own design that still work today. Marussi carried out geodetic projects in Ethiopia, in Greece and in Karakorum. As a geophysicist, he was invited to take part in an Italian expedition that became the first ever expedition to summit K2 in 1954. This is testified by several photos donated to the Historical Archive by his niece, as well as by a fascinating article that appears in the Generali magazine, “il Bollettino” in 1955, entitled Il gravimetro per la spedizione al K2 (“The Gravimeter for the K2 Expedition”). In Marussi’s own words, a gravimeter is “an expensive and highly delicate” instrument, used to measure gravitational acceleration and loaned to the expedition from “a well-known American company” in Houston. With insurance provided by Generali, “for any incidents that may afflict it, from the moment it left Houston until it was safely restored to its rightful owners after five months of use on the Baltoro glaciers”, Marussi was able to use this delicate instrument with the “peace of mind and calm” necessary for the successful conclusion of his research.