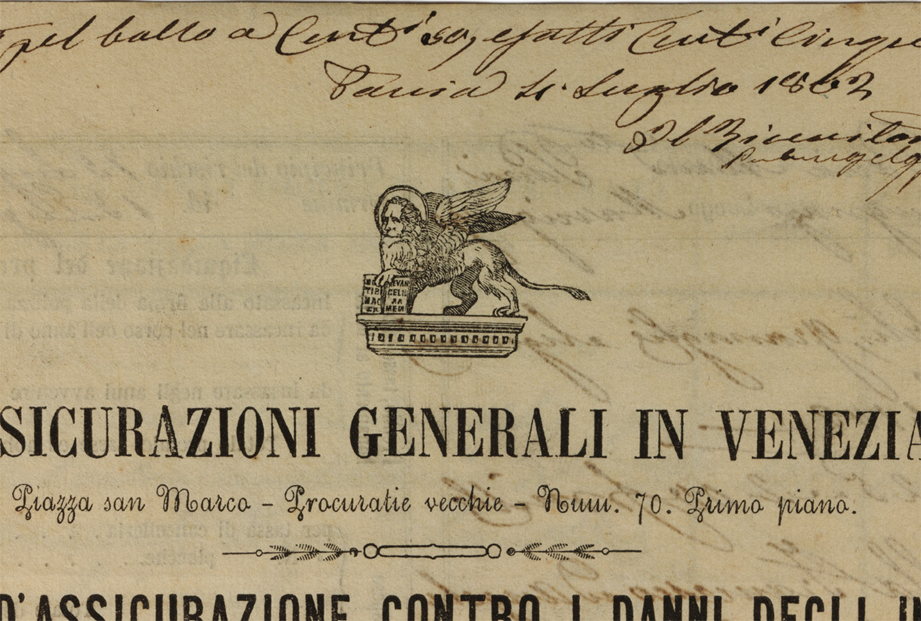 The history of Assicurazioni Generali is strongly linked to Venice and the symbol of the winged Lion of St. Mark. The iconography was first affirmed for the Venetian management and Italian territory from 1860, and then gradually everywhere into the twentieth century, until becoming the undisputed brand image of Generali that everyone knows.

Before the brand was registered in 1970, the lion was presented in a number of different ways: facing right, facing left, with sword drawn, with rationalist forms ...

Its story is known: after 1848, when the name of the company changed from Assicurazioni Generali Austro-Italiche to Assicurazioni Generali, the imperial double-headed eagle was no longer used in Italy, although it was used by the Management in Trieste until the First World War. For a time, no symbol was used on policies in Italy, and the first lion appeared in 1860, according to documents in the Historical Archive. Among the earliest testimonials is a policy of 1862, which features a curious anthropomorphic lion with thoughtful eyes, flowing hair and beard, very similar to Giuseppe Garibaldi or Giuseppe Verdi. It is a fire insurance policy signed with the main agency in Pavia of "Assicurazioni Generali in Venice", run by brothers Francesco and Angelo Mella for insuring "furniture, grain and timber".

This possibility is naturally compared with the iconographic fortune of the two Risorgimento figures, but this would be suggestive because several important Venetian exponents of Generali were personally involved in the affairs of the Republic of Daniele Manin. Moreover, in the overall picture, the sometimes heated confrontation between the Italian soul and the Austrian soul was a constant in the history of the Company, from its foundation until 1918, when Trieste became part of the Kingdom of Italy.

The lion's story as a symbol and company trademark has been reconstructed on the basis of documents from the Historical Archive by Pietro Egidi, From Eagle to Lion. The Company’s evolution in Spirit end Symbols, in Generali in History. Tales from the Archive. Nineteenth Century, Venice, Marsilio, 2016, p. 35-45.